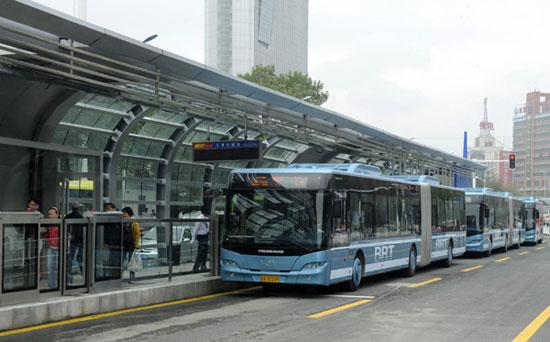 New transportation regulations in Xinjiang’s capital city of Urumqi have heightened security presence on public buses and enacted a lengthy list of banned items. These regulations come during a nationwide security campaign in which Xinjiang has been labeled the “frontline of terror.” Urumqi has been the site of two high-profile deadly attacks in recent months—one at the city’s largest train station in April, and the second at a public market in May. Reuters reports:

The new rules in the capital Urumqi, similar to restrictions usually imposed by airlines, reflect how nervous officials are about trying to contain outbreaks of violence in the region, home to the Muslim Uighur minority.

[…] The local government in Urumqi, a city of three million, issued new rules after a transport security meeting, barring passengers from bringing on board liquids, lighters and unknown powders “to strike a severe blow on all forms of criminal activity on public buses,” the state-run Legal Daily said.

Banned substances include gasoline and firecrackers, but also drinking water, cooking oil and yogurt. Restrictions on liquids have been in force for several years on aircraft, aimed at preventing militants from bringing on board sophisticated, hard-to-detect explosives.

The Legal Daily said at least two security guards would conduct hand checks and bag searches at every bus stop on 154 Urumqi bus routes and stop passengers with banned items from boarding.

“Bus drivers have two roles – while successfully carrying out their regular tasks they will also conduct security checks on suspicious individuals,” the newspaper said. [Source]

While several recent attacks in and outside of Xinjiang have been blamed by authorities on separatism and religious extremism, public buses in China have also seen a number of arson attacks on buses clearly not carried out with separatist motives—for example, one in early July in Hangzhou, or one last week in Guangzhou. The South China Morning Post reports that SWAT teams in Beijing are being trained in dealing with bus arsonists as part of new anti-terror measures:

Bus drivers in Beijing have been trained by SWAT officers on how to deal with arsonists, and knife-proof vests and pepper spray were distributed to 21 hospitals in the latest move to step up anti-terrorism in the capital.

Special weapons and tactics officers trained more than 300 bus drivers, telling them how to fight against arsonist suspects in an emergency.

Drivers were taught to yell out to distract arson suspects and “quickly and accurately” seize the hands of suspects holding lighters and push them away, Beijing Youth Daily reported. […] [Source]

Amid frequent incidents of violence, central government allegations of terrorism, and a nationwide anti-terror campaign that has newly empowered some security officials with firearms, Chinese censors have been carefully managing the media narrative on violence.