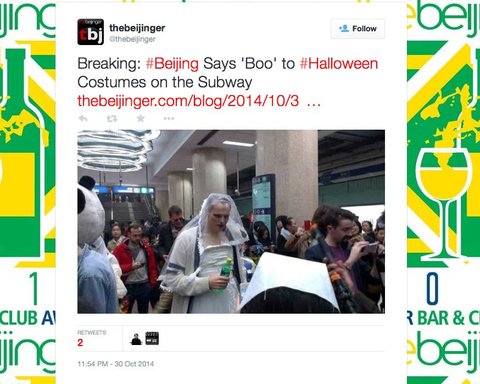 In preparation for the upcoming Asia Pacific Economic Cooperation (APEC) summit, the Beijing police department has warned commuters that they will be arrested if they enter the city’s subway stations in Halloween costumes. Sui-Lee Wee and Ben Blanchard at Reuters reports:

Beijing police have warned people they face arrest for wearing Halloween fancy dress on the subway as it may cause crowds to gather and create “trouble”, a state-run newspaper said on Friday, unveiling a list of APEC summit-related restrictions.

[…] With Halloween’s arrival, the wearing of fancy dress or scary make-up on the city’s extensive subway network could cause “panic”, the Beijing News noted.

“Public transport police point out, please do not wear strange outfits in subway stations or in train carriages, which could easily cause a crowd to gather and create trouble,” it said.

Police had the power to arrest those who “upset order”, the paper said.

“If the chaos is serious and causes a stampede or other public safety incident, the police will deal with it severely in accordance with the law.” [Source]

The New York Times’ Didi Kirsten Tatlow provides a list of additional restrictions that have been implemented ahead of the APEC summit:

Preparations for the APEC gathering, which starts next week, has prompted a wide range of security measures to prevent threats to social order:

•Flash mobs must register with the police in advance and confine their performance to a specified time frame, according to the organizers of one recent event at a major Beijing shopping mall. A ballet troupe that had been given a 5 to 5:30 p.m. slot was delayed in traffic and allowed to dance only the remaining six minutes of the allotted time.

•Marriage registries will shut for six days, and construction work will halt in the city that is an eternal construction site. The police will not issue entry and exit visas. Schoolchildren will have to attend school during two weekends, with a six-day holiday between — all to accommodate the meeting. [Source]

Additional security and anti-smog measures have also been enacted in the city ahead of the APEC summit.