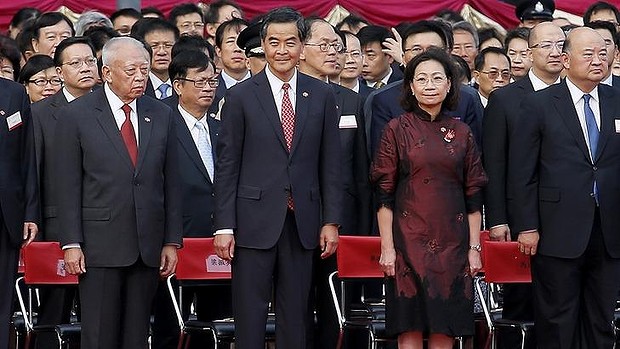 Hong Kong Chief Executive C.Y. Leung, whose resignation has been the focus of protesters’ demands over the past week, signed a contract with Australian engineering company UGL that paid him US$6.5 million in fees. Leung reportedly failed to disclose this deal when he was elected chief executive. Nick McKenzie, Richard Baker, and John Garnaut at Fairfax Media broke the story in an investigation today:

The payments were made in two instalments, in 2012 and 2013, after he became Hong Kong’s top official.

The payments relate to a deal in which UGL bought an insolvent 200-year old British property services firm he was associated with called DTZ Holdings, whose prospects depended on Mr Leung’s network of managers and clients in Hong Kong and mainland China.

Mr Leung, who is currently battling unprecedented pro-democracy protests, strenuously defended his judgment to not declare the payments on his register of personal interests, when Fairfax brought them to his attention.

The sale left Mr Leung with a secretive financial windfall – including an additional guarantee that UGL would pay to him an outstanding £1.5 million bonus owed by the insolvent firm – but left DTZ’s other shareholders and unsecured creditors with nothing, wiping out investments and debts worth tens of millions of dollars. [Source]

RTHK reports that Leung has denied any wrongdoing:

The Faifax reports said Mr Leung signed a secret deal to help UGL in 2011. He announced his resignation from DTZ on November 24, formally confirmed his candidacy for chief executive on November 27 and signed the 4 million pound contract with UGL on December 2.

Mr Leung did not include the payments on his declarations of personal interests. A statement from Mr Leung’s office said he had stepped down as an executive councillor well before the deal was signed. [Source]

Gwynn Guilford at Quartz reports on the terms of the deal, and how this development could provide an easy out for the Chinese government in resolving the demands of protesters:

But while noncompete agreements are fairly standard for an executive of Leung’s profile, the contract’s other clauses are more plainly shady: Leung agrees to provide “assistance in the promotion” of UGL and DTZ and that he will serve as “a referee and advisor from time to time”—which clearly indicates future commitments. Also questionable is that Leung, who was sworn in on Jul. 1, 2012, never disclosed any of this.

At the time the contract was signed, few believed Leung stood a chance of winning the chief executive position, a seat picked by a electoral committee whose members have strong ties to Beijing. UGL told Fairfax Media that that was why it neglected to include a clause invalidating the agreement in the event that Leung was elected.

The exposé’s timing—days before the pro-democracy movement leaders meet with the government—is curious. The Beijing-backed Hong Kong government has little room to bargain in terms of reforming election procedure, which could entrench the protesters’ resolve. Leung stepping down would be perhaps the easiest of the protesters’ demands to fulfill. [Source]