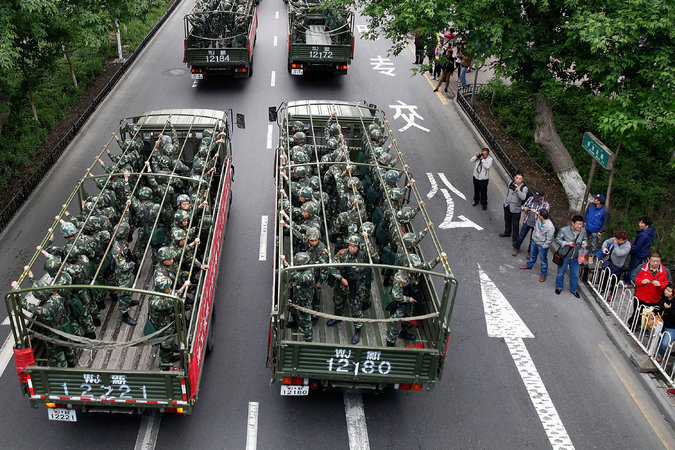 While protests in Mong Kok and Central districts of Hong Kong continued into the second week, turnout was greatly reduced, and businesses and government workers were able to return to work on Monday. Over the border in mainland China, residents have expressed mixed feelings about the protests. Matt Sheehan reports for The World Post from Shenzhen:

To Chinese youth who came of age in an era of breakneck economic growth orchestrated by the one-party system, serious opposition to the government is seen as a dead-end, both socially and professionally. And in the context of hyper-competitive job and marriage markets, political concerns remain almost entirely absent from the daily lives of most young people.

Asked about the activities of Hong Kong’s young activists, many Shenzhen residents summed up their take with a Chinese idiom: “They’ve got full stomachs and nothing much to do.”

That dismissive rhetoric stems from both the economic gaps among neighboring cities and an information divide. Whereas Hong Kongers have been bombarded with footage of idealistic students braving tear gas and pepper spray, the Chinese government has heavily censored any images of the events, and mainland media has limited coverage to editorials condemning the “chaos” in Hong Kong. [Source]

But for others who, like some in Hong Kong, may not identify as Chinese, the protests resonate on a more personal level. Keith Bradsher and Chris Buckley report for the New York Times on the impact the protests are having on Uyghurs, Tibetans, and Taiwanese:

Among Tibetans and Uighurs, beleaguered ethnic minorities in China’s far west, there is hope that the protests will draw international scrutiny to what they say are Beijing’s broken promises for greater autonomy.

The central government’s refusal to even talk with pro-democracy advocates in Hong Kong, exiled activists add, also highlights a longstanding complaint among many ethnic minority groups in China: the party’s reliance on force over dialogue when dealing with politically delicate matters.

“We’ve seen this movie before, but when people stand up to the Chinese government in places like Lhasa or Urumqi and meet brutal resistance, there is no foreign media to show the world what’s happening,” said Nury Turkel, a Uighur-American lawyer and activist, referring to the regional capitals of Tibet and Xinjiang. “The difference here is what’s happening in Hong Kong is taking place in real time, for all the world to see.”

[…] “What we have in common with the people in Hong Kong is that we are all fighting for freedom and justice against an authoritarian regime that has broken its promises again and again,” Tenzin Jigdal, a Tibetan activist, said in a phone interview from Dharamsala, India, home to the Tibetan government in exile. [Source]

Read more about the recent protests, via CDT. Also visit The Guardian, South China Morning Post, and The Wall Street Journal for real-time live blog reports on the events unfolding in Hong Kong.