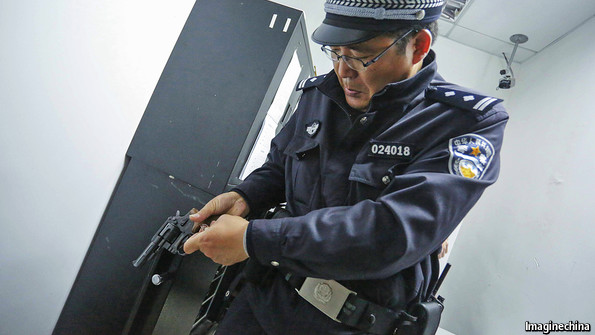 The Economist examines the arming of Chinese police, which has surged this year following a string of violent incidents including a deadly attack in Kunming in March.

The government promptly decided it must make weapons more readily available to police. It has acted quickly to do so—some critics say too quickly and too rashly. The increased deployment of guns to rank-and-file officers raises the prospect of abuses in a system that lacks public accountability for police misconduct against citizens. It has also increased the risk of mistakes by poorly trained officers who are unfamiliar with weapons. In recent months Chinese media have reported on at least two deaths in police shootings where local witnesses suggested the use of deadly force may not have been justified. In May in Zhengzhou, the capital of Henan province, police accidentally fired a handgun into the floor at a kindergarten lecture on personal safety. A child and four parents were injured.

[…] Some special police units in big cities are reportedly better trained than small-town officers. The recent expansion of such units has been rapid and striking. The city of Shanghai has deployed 125 mobile units of elite armed police around the city since May, each carrying at least two guns (following America, Chinese media often describe them as SWAT, or Special Weapons and Tactics, teams). Fifteen groups of ten officers each—all in blue Ford vans—patrol one tourist district near the Huangpu river. One of them is often parked on the Bund, Shanghai’s famous riverfront, close to revellers taking wedding photographs. Another is often stationed near People’s Square; during a recent rush hour the driver and a few of the squad in the back could be seen smoking cigarettes. If a terrorist strikes on their watch, they are allowed to shoot on sight. [Source]

Public opinion on the issue is murky, but appears mixed, as do the views of police officers themselves. From The Washington Post’s William Wan last month:

Amid growing fears among the public, officers say they have trepidations of their own because many received their new guns with little to no training.

At a recent training session in Shandong province, one detective said, several officers — not aware of the recoil force that comes with shooting — gripped their guns improperly and broke their thumbs.

Some police officers have been issued licenses without visiting the firing range, because their departments are fudging paperwork, according to officers who spoke on the condition of anonymity.

“Most of us haven’t shot a gun in years,” said the detective. “A lot of cops are afraid to even hold one.” [Source]