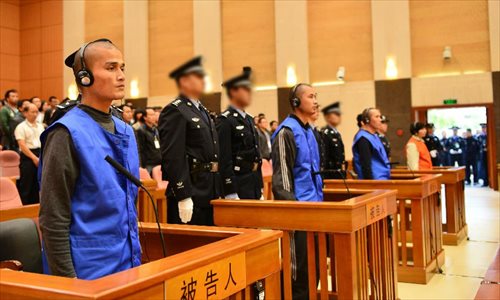 Xinhua reports that a Chinese court has upheld the death sentences of three men implicated in the violent attack that killed 31 people and injured more than 100 others at a railway station in Kunming earlier this year. From AFP:

The Intermediate People’s Court in the southwestern Chinese city had convicted and sentenced to death Hasayn Muhammad and two others for “leading a terrorist group” that planned and carried out the attack at the city’s railway station on March 1. Though Xinhua only mentioned Hasayn Muhammad’s appeal, it said that the court upheld the sentences of the other two men as well. [Source]

All three men were found guilty of planning, organizing, and leading the attacks, Global Times reports:

Investigators found that the three men had been training recruits for terrorist activities, including the attack at Kunming railway station, since December 2013.

All three men were arrested for allegedly planning to illegally cross the Chinese border on Feb. 27, just days ahead of the attack.

After failing to establish contact with Iskandar, five members of the group carried out their attack as originally planned on March 1.

Four were shot dead at the scene by the police while Patigul Tohti, weakened by a bullet wound, was captured. Thirty-one people died and 141 sustained injuries. [Source]

For more on the Kunming attack, or on China’s ongoing nationwide terror crackdown, see prior coverage via CDT.