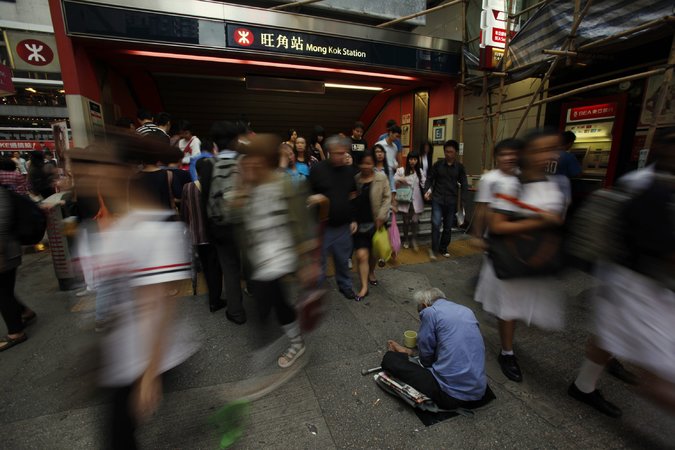 Over the past week, the protesters in Hong Kong have focused on well-defined political demands, with full democratic elections and the resignation of Chief Executive C.Y. Leung at the top of the list. But protesters have also been driven to the streets by a variety of longstanding grievances, many of which stem from the economic inequality which has built up in Hong Kong society, putting the city at the top of The Economist’s “crony-capitalism index,” or list of “countries where politically connected businessmen are most likely to prosper.” The gini coefficient, which measures the gap between rich and poor, is at the highest levels ever for Hong Kong, according to a 2013 report from Bloomberg:

Hong Kong’s Gini coefficient, a measure of income inequality, rose to 0.537 in 2011 from 0.525 in 2001, the government said last June. The score, a high for the city since records began in 1971, is above the 0.4 level used by analysts as a gauge of the potential for social unrest. [Source]

Hong Kong’s close business ties to mainland China, especially since the handover in 1997, have exacerbated these inequalities. But as the recent protests show, economic issues are quickly becoming political for residents of Hong Kong who are missing out on the boom. Neil Gough reports for the New York Times:

China is grappling with a political problem in part because Hong Kong is dealing with an economic one. Underlying the current unrest in Hong Kong, an affluent city of 7.2 million that was a British colony for 155 years before it was returned to China in 1997, is a widening wealth gap.

Growing closer to China has brought a bonanza to Hong Kong’s finance, trade, retail and real estate industries. Despite this, average wage growth in the city has stagnated for years, while the costs of housing and daily goods have surged.

Hong Kong’s silent minority of elite tend to fall in line behind the Beijing leadership on political or economic policies that touch the city. Now, it appears to be largely the squeezed middle class, and a younger generation discovering its political voice, driving the unprecedented demonstrations that have shut down major routes in some of Hong Kong’s busiest districts over the past week.

China’s leaders “have ignored the man on the street for so long because everyone told them Hong Kong people aren’t interested in politics, that it’s all about business, and they haven’t realized that society has clearly changed,” said Fraser J.T. Howie, a co-author of “Red Capitalism: The Fragile Financial Foundation of China’s Extraordinary Rise.” [Source]

Income inequality is one of several economic and social issues that have increased tensions between the mainland and Hong Kong in recent years, leading up the protests. Bloomberg outlines “seven stresses [that] underscore the Hong Kong-Beijing divide,” including property pressure, cost of living, visitor influx, income inequality, dirty skies, university competition, and the diminishing value of Hong Kong.

Occupy Central for Love and Peace, the group that is a key player in the current protests, differs in its mission from the Occupy movement in the U.S. and elsewhere, which has focused on the economic gap between the wealthiest one percent of Americans and the “99%,” whom the movement claims to represent. But, as Eli Friedman wrote in The Nation in September, before the current demonstrations were launched, the fundamental grievance of the two movements is the same:

In many ways, Occupy Central seems hardly connected to its symbolic progenitor on the other side of the Pacific. Indeed, the movement is demanding an expansion of precisely the kind of electoral system that Occupy Wall Street condemned for being hopelessly corrupted by money and corporate influence. Students in Hong Kong are working closely with established political parties, and the movement even enjoys support from some individuals from the financial sector.

But underlying these important differences there is a common theme: anger over the inability of anyone except the super-wealthy to have a voice in politics.

[…] Occupy Central has in part grown out of this restive political milieu. As was the case for Occupy Wall Street, activists in Hong Kong understand that they will need more political democracy in order to get more economic democracy. Democratic elections may not be sufficient to address every problem in Hong Kong, but it will certainly be necessary.[Source]

When the Occupy Wall St. protests broke out in New York, the official Chinese media were quick to criticize economic inequalities in the U.S. Ana Swanson writes in Forbes that the Chinese government is not casting the same critical eye over income gaps in Hong Kong:

The U.S. has a severe problem with income inequality, no doubt. But these figures suggest that Hong Kong’s problem with income inequality may be even worse. With issues such as these, the Chinese state media could benefit from revisiting its own advice to the U.S. on dealing with its troubling wealth gap — for example, this editorial by Shan Renping, an editor of the Chinese edition of Global Times, which addresses the Occupy Wall Street protests. In the following excerpt, try changing the “U.S.” to “Hong Kong” and judge for yourself the relevance.

The centralization of capital has greatly facilitated the development of human society, but the eventuality of the unbalanced power distribution has become a major source of concern.

Mild adjustment through social programs to counter-balance the social disparity proved to be effective in the past, but a short-term plan cannot close up the gap between the rich and poor definitively.

The whole-heartedness of the political agenda of the demonstration is honest and endearing. Though the force it mustered against the established financial power is limited, the point it raised against the capitalist system is sharp and revealing.

The survival of the higher political structure in the US now highly depends on whether the voices heard in the protest can be reflected in future public policies. We have yet to see whether the US can correct itself.

See also an article by University of Hong Kong’s Toby Carroll in The Guardian in July (via CDT) discussing economic inequality as the root of the Occupy Central protest movement. Read more about the ongoing protests in Hong Kong.