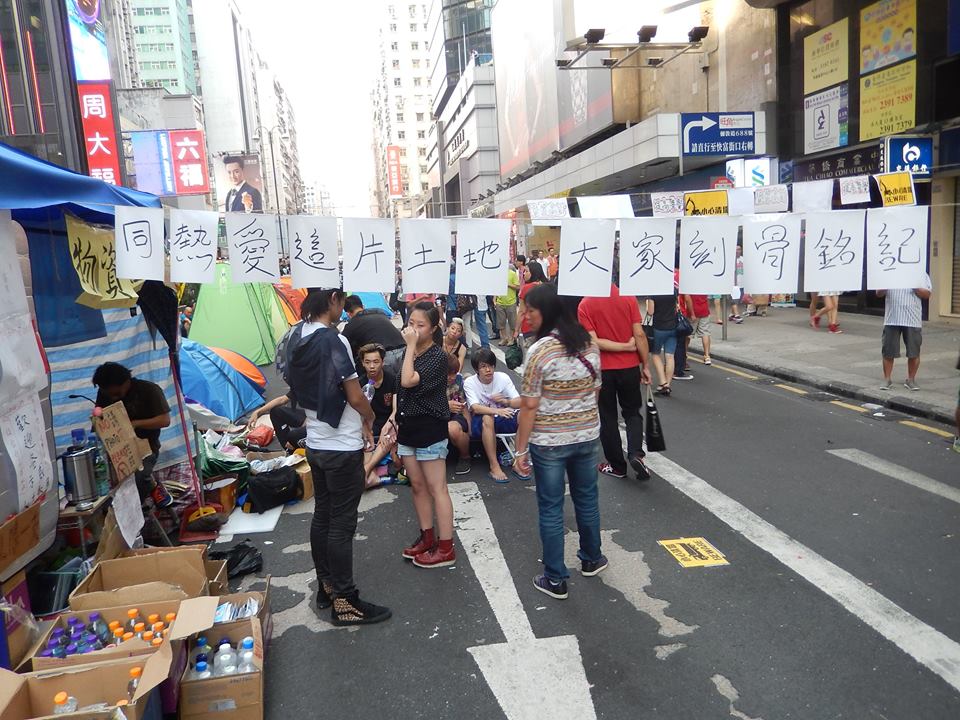 As street protests in Hong Kong enter their second month, organizers have scrapped plans for an informal public referendum on what direction the protests should take. Chris Buckley and Alan Wong report for the New York Times:

Student leaders and organizers of Occupy Central With Love and Peace, the group that laid the groundwork for a civil disobedience campaign for democracy, had urged people to vote at protest sites on Sunday and Monday as a way of registering their support for student negotiators seeking political concessions from the government.

The referendum boiled down to two simple questions: Did voters endorse demanding that the Hong Kong government press Beijing to make democratic concessions on election rules, and did they agree that the changes should apply to city Legislative Council elections in 2016 and the race for chief executive in 2017?

But hours before the balloting was due to start on Sunday night, organizers announced it was off and apologized. They said there was too much disagreement over the wording and value of the vote. “We acknowledge that there was not enough consultation with the public,” they said in an emailed statement.

At a news conference, some organizers were contrite, while others cast their surprise move in the best possible light. [Source]

The Wall Street Journal’s Diana Jou reports from the Hong Kong streets on divided opinions about how the movement should continue:

As protesters work to determine the best strategy for continuing the movement, a number of celebrities who have shown support for the demonstrations have reportedly been blacklisted in China. State media has been ordered not to write about 47 stars on a blacklist, according to Julie Makinen of the Los Angeles Times. From the New York Times’ Amy Qin and Alan Wong:

But it is unlikely that [pop singer Denise] Ho will be singing that song [Raise the Umbrella] in mainland China, where, she said the other day, she gets about 80 percent of her income, mostly from performances. She has had no invitations to perform there since the summer, when she began publicly showing support for the pro-democracy movement. A fashion brand recently canceled a job with her, giving no particular reason, she said.

Anthony Wong, another Hong Kong singer who has joined the pro-democracy demonstrations, said that two November shows in mainland China had been “indefinitely postponed” by concert organizers, and that he had no pending invitations to perform there.

“I’m just guessing, but I think they are trying to ban us because they’re afraid of different views,” Mr. Wong said late Thursday night. “They fear that we would spread them. And of course it’s an attempt to punish us, a cold-shoulder treatment of sorts, so we can’t earn their money.” [Source]

Movie star Chow Yun-fat stood by his decision to support the protests, despite his potential loss in revenue:

Chow Yun-fatt shows why he is a #HK screen god. Asked abt being banned on Mainland: "I'll just make less then" pic.twitter.com/sIhXGbfyEo

Other supporters of the movement have also been targeted by anti-Occupy groups. Jimmy Lai, owner of the Apple Daily, has been a steadfast supporter of the protests since they started:

Last week, a group of masked men poured soy sauce over thousands of copies of his newspaper awaiting distribution. From Nicola Davison at the Telegraph:

Anti-Occupy protestors resentful of Apple owner Jimmy Lai’s staunch support of the movement have surrounded the office of the paper’s owner Next Media for weeks. Mr Lai’s businesses have been targeted by cyberattacks and staff have had to form human chains to get copies of the newspaper out, despite a court order being issued against the besiegers.

Despite the attack 210,000 copies of Apple Daily sold on Wednesday, more than its audited average for the first half of the year of 190,000, the Post said.

Sham Yee-lan, chairwoman of the Hong Kong Journalists Association, told the Post: “This is no longer just Apple’s problem; it has become an outright attack aimed at depriving the public of their right to know.” [Source]

In the latest sign of simmering tensions, more than 1,000 “anti-Occupy” supporters gathered to denounce the pro-democracy protesters close to the harbor front Star Ferry pier.

[…] During heated exchanges, a cameraman and reporter for the city’s largest free-to-air television station, TVB, were surrounded and harassed by hostile crowds, some of whom pushed them around, tore off the reporter’s tie and snatched off a pair of glasses from the cameraman amid shouting and cursing.

The pair eventually had to be escorted from the melee by police officers.

A female reporter for Hong Kong’s public broadcaster, RTHK, Wong Wing-yin, was also kicked on the leg and body by blue ribbon supporters after being pushed to the ground. She was taken to hospital. [Source]

Read more about Occupy Central and the ongoing protests via CDT.