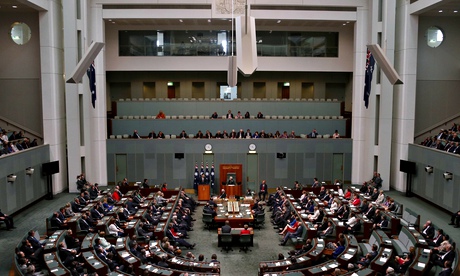 As China and Australia reached a new trade agreement on Monday, Australian prime minister Tony Abbott expressed effusive enthusiasm for Xi Jinping’s pledge to “turn China into a modern socialist country that is prosperous, democratic, culturally advanced and harmonious by the middle of the century.” The Guardian’s Tania Branigan, Daniel Hurst and Katharine Murphy report that Abbott’s apparent optimism is misplaced:

The Australian prime minister referred to Xi’s democracy comment at a state dinner held to mark the president’s visit. “I have never heard a Chinese leader declare that his country would be fully democratic by 2050,” Abbott said on Monday night. “I have never heard a Chinese leader commit so explicitly to a rule-based international order founded on the principle that we should all treat others as we would be treated ourselves,” he said. [Read more on the global role China sees for itself via CDT.] “I thank you, Mr President, for this historic, historic statement which I hope will echo right around the world.”

That response startled China-watchers. “There is nothing new in what the Chinese president has said. What’s important is actually the concept of a ‘modern socialist country’: it’s a country run by one party, the Communist party,” said Jean-Pierre Cabestan, an expert on Chinese politics at Hong Kong Baptist University. “I’m afraid Abbott has been a bit too optimistic … He seemed a bit overwhelmed having so many heavyweights around him.” [Source]

A speech marking the 65th anniversary of the founding of the Chinese People’s Political Consultative Conference in September shed some light on the form of democracy Xi has in mind. He expounded a Chinese model of “consultative democracy” under which the government is not chosen by the people, but pledges to consult them on relevant matters. Steps already taken in this direction include intensive monitoring of online public opinion, which was the subject of some discussion last summer. On his Dart-Throwing Chimp blog, Jay Ulfelder commented at the time that these systems exist to serve the Party more than the people:

[…] Asking people what they think and listening and responding to their online chatter are forms of consultation, but this consultation isn’t protected, equal, or binding. It’s not protected because Chinese citizens still face harsh punishment for speaking out on sensitive topics. The state still chooses who gets to speak about what, and transgressions of those boundaries carry steep costs. The consultation isn’t equal because not everyone can participate. […]

Finally and probably most important, the consultation isn’t binding because the state decides when it will respond to what it hears, and citizens still have no way to hold them accountable for those choices. This is why competitive elections are so important. Without a formal mechanism that gives all citizens a chance to reward or punish political decision-makers for their behavior, the Chinese Communist Party can continue to cherry-pick its “listening” efforts in ways that are meant to maximize its own corporate interests without really attending to citizens’ preferences. There may be an element of democratization in these polling and eavesdropping endeavors, but if so, it’s an awfully thin and fragile form of it. [Source]

Similar confusion about Beijing’s use of political terms might arise from its recent emphasis on rule of law, which it regards as an instrument of Party rule rather than a restraint upon it.