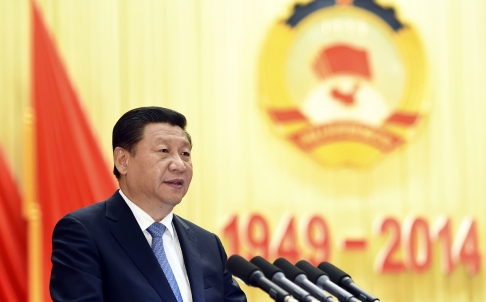 At a speech last Sunday honoring the 65th anniversary of the Chinese People’s Political Consultative Conference (CPPCC), Xi Jinping praised “consultative democracy” as China’s unique way of allowing the people to participate in governance, and urged the political advisory body to stand by and improve the Chinese institution. Xinhua reports:

[…] “There are various ways to realize democracy. We should neither stick to one model nor claim that there is a universal one,” Xi said.

Democracy is defined not only by people’s right to vote in an election but also the right to participate in political affairs on daily basis, he said.

[…] Xi pledged that the Communist Party of China (CPC) and government will carry on consultative democracy and consult as many people as possible on as many issues as possible.

Through consultative democracy, the CPC realizes its commitment to represent the basic interests of all people and serve the people, heart and soul, he said. […] [Source]

Xi’s speech came as thousands of university students in Hong Kong were gearing up for their ongoing week of class boycotts, the most recent stage in months of public protest against Beijing’s moves to limit universal suffrage in upcoming Hong Kong elections. Evoking a year-old and heavily ridiculed quote of Xi’s, China Daily further explains the concept of “consultative democracy,” and why Xi chose to extoll it last Sunday:

[…] No remark more vividly explains why China cannot copy the political institutions of the West. No rhetoric more explicitly conveys why democracy may take different forms, but its core is to have people’s will represented in state affairs and policies.

Xi said that democracy is not decoration and it should be used to solve problems for the people. He also said that we do need to borrow what is good from Western political institutions, but that should never mean that we should give up our own fundamental political system. […] [Source]

The South China Morning Post looks at this speech as yet another indication that Xi is not looking to radically reform China’s current political system:

The two takeaway words were “consultative democracy” but the key message was gradual improvement, not radical reform.

The message was similar to one Xi delivered on September 5 to mark the 60th anniversary of the National People’s Congress. In that address, Xi, who is also the general secretary of the ruling Communist Party, called on NPC members to strengthen the national legislature’s role under the party’s absolute leadership.

[…] “Xi’s comments aim to realise some powers enjoyed by NPC delegates and CPPCC members, such as their right to supervise the government, to scrutinise the budget and to approve the appointment of government officials,” Zhang said. [Source]