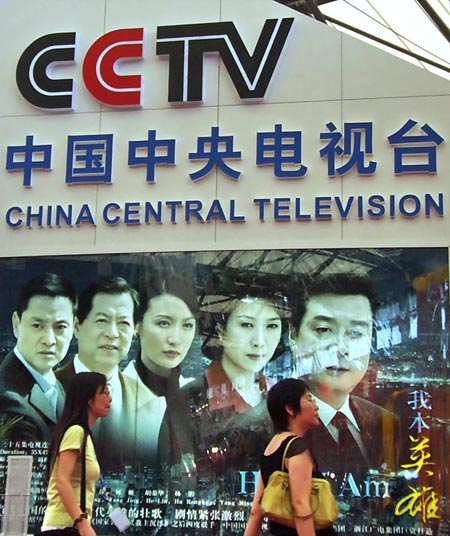 CCTV representatives didn’t respond to requests for comment. It has cited efforts to branch out online, including offering its own apps and online video. It is also increasingly cooperating with China’s regional satellite broadcasters, which are also government-controlled but have been more adventurous in their programming.

At stake is the broadcaster’s decadeslong status as China’s top information source. Experts say CCTV must ramp up innovation and overhaul its programming to keep up with both online and regional rivals to follow the country’s rapidly changing media landscape.

[…] CCTV doesn’t disclose national ratings figures. But CCTV’s ratings for this year’s Spring Festival Gala fell to below 10% of the viewing public for the first time, according to local media reports. A person involved in its production said the figure was credible.

Its channels attracted 9.1% of television ad spending last year, down from 9.7% in 2011, according to research firm CSM, while the share that went to provincial satellite channels rose to 26% from 21%. […] [Source]

Reuters reports that another unimpressive CCTV ad auction—and the broadcaster’s decision to again withhold many of the results—could be indicative of both its declining popularity and the overall economic slowdown in China:

China’s bellwether TV ad auction was hit by the country’s slowing economy and rising competition from online entertainment, but showed modest recovery from last year – at least for its cornerstone evening news program.

[…] CCTV’s annual ad auction, which sells advertising slots for the upcoming year, is considered a barometer for China’s economy.

[…] Comparisons with earlier years are difficult, since CCTV hasn’t publicly disclosed many of this year’s results, including who secured the exclusive online naming rights for the network’s Spring Festival Gala. Tuesday’s auction clocked in at 6 hours, about half the length of previous years.

CCTV is battling shrinking income as its viewers and advertisers migrate to online and mobile platforms. The state broadcaster’s advertising revenue dropped 10 percent in the first nine months of this year, compared with 2013, according to CTR Market Research. [Source]