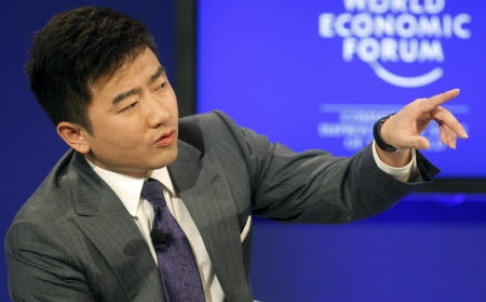 The Xi administration’s ongoing drive against Party corruption made its way to the head offices of China’s state broadcaster early last month when CCTV’s financial news director Guo Zhenxi had been detained over corruption allegations. Over the weekend, the People’s Daily tweeted that CCTV “Economic News” anchor Rui Chenggang had been detained, along with Li Yong, the vice director of the network’s financial news channel. People’s Daily later tweeted that Rui is the subject of a graft probe regarding shares he held in a PR company that has provided services to CCTV. The Global Times reports on the surprise detention of the celebrity television host last week:

Rui was scheduled to host a program on Friday night, but was taken directly by prosecutors from the CCTV premises without prior notice. His seat was left vacant and his microphone remained on the anchor’s desk, a sign of his sudden departure, the Beijing Times reported.

[…] Rui’s detention came after the investigation and incarceration of several senior staff in the broadcaster’s finance and economics news channel, including channel head Guo Zhenxi and producer Tian Liwu, on suspicions of corruption, the Supreme People’s Procuratorate announced on June 1.

[…] On June 6, Wang Shijie, a producer close to Guo and the head of finance for the channel, was also taken away for investigation, together with another female host and writer-director, financial news portal Caixin reported.

Eight staff members from the CCTV financial news channel have been so far detained. The network’s vice director of financial news Li Yong and another unnamed producer were also taken away by prosecutors on the same day as Rui, Caixin Online reported Saturday. [Source]

A 2009 New York Times profile of Rui described him as the “face of Chinese capitalism: young, smart and, to the dismay of some, deeply nationalistic.” In coverage of Rui’s detention, the Times recaps the nationalism and tendency towards confrontation that have made Rui a controversial figure:

[…] A biography on a CCTV English-language website said Mr. Rui had interviewed more than 30 heads of state and more than 300 top executives of Fortune 500 companies. The biography said that in 2005, Richard C. Levin, then the president of Yale University, nominated Mr. Rui to be a Yale World Fellow. Mr. Levin wrote in an introduction to one of Mr. Rui’s books, “Life Begins at 30,” on China’s economic rise, that he was “an energetic young standard-bearer of the New China.”

Critics of Mr. Rui have long denounced him for his nationalistic campaigns and outrageous, confrontational statements. Mr. Rui achieved widespread fame in 2007 when he used his blog to successfully start a populist campaign to compel the government to remove a Starbucks coffeehouse from the historic Forbidden City in Beijing. A Chinese cafe replaced it. In 2010, Mr. Rui became the subject of Internet mockery over a comment he made when President Obama called for questions from the Korean news media at a Group of 20 summit meeting in South Korea. “I’m actually Chinese, but I think I get to represent the entire Asia,” he said.

The next year, at the World Economic Forum in Dalian, China, Mr. Rui asked Gary Locke, then the United States ambassador: “I hear you flew here coach. Is that a reminder that U.S. owes China money?” Mr. Locke replied that it was standard practice for American diplomats and other American officials to fly in economy class. [Source]

The South China Morning Post has details on possible allegations into Rui, and on another recently detained staff member:

Registration information from the Beijing Industrial and Commercial Bureau showed that a Rui Chenggang once owned shares in a public relations consulting firm named Pegasus starting from 2002. The name was deleted from the investors’ list after 2010.

It is unknown whether this Rui Chenggang is the same as the presenter.

Pegasus was later acquired by the American PR firm Edelman Group. More from the New York Times on the investigation, the implications of Rui’s detention, and public opinion about the celebrity anchorman:

[…] “Rui was taken away by the procuratorate,” said Zhan Jiang, a journalism professor at Beijing Foreign Studies University. “It means he is being investigated for crimes committed in a professional capacity. It’s most likely economic crimes.”

[…] Mr. Rui’s detention, which took place abruptly on Friday, has generated widespread conversation online in China. He had admirers who called him the face of a modern China, but also many critics who denounced his nationalistic declarations and flashy lifestyle, which was exemplified by the fact that he drove a Jaguar to work and had a penchant for Zegna suits. Mr. Rui attended meetings of the World Economic Forum and was named a Yale World Fellow in 2005. [Source]

CNN rounds up video coverage displaying Rui’s intrepid/galling interactions with diplomats and world leaders, his extravagant demeanor, and his eagerness for the spotlight:

Offbeat China looks at how the corruption allegations could affect Rui’s fans, many of whom see him as an inspirational symbol of bootstrapping opportunity in modern China:

Rui, who came from no background and worked his way to become one of China’s most popular star anchors, has been the face of the “Chinese dream”. In the summer of 2013, Rui said in an interview that his success could “offer inspirations to millions of ordinary young people in China,” and that “the most fundamental and important thing of being a journalist is to have a strong sense of social responsibility.”

Today, he is detained on suspicion of taking bribes, and even deep involvement in high-ranking officials’ corruption cases. His “words of wisdom” now sound like a joke. Many of his fans expressed feelings of being cheated on.

But he and his fans are definitely not alone. In China, hypocrisy always goes hand in hand with corruption. Being a Chinese, you will feel “cheated on” quite frequently throughout your life by your officials. Taking a look at the several hundreds of officials sacked due to corruption this year, most of them, too, had their own “words of wisdom.” […] [Source]