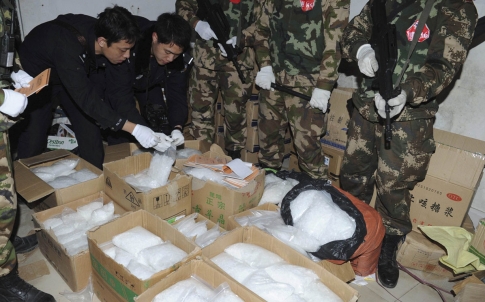 For The Telegraph, Malcolm Moore reports that 24,000 suspects—some of them high-profile celebrities—have been detained and over 100,000 more investigated in the past 50 days as part of a nationwide anti-drug campaign:

The son of Jackie Chan, the kung fu actor, was one of the detainees as police made examples of several actors and models. The authorities also raided one bar in Beijing popular among foreigners and deported those who failed urine tests.

Liu Yuejin, the director of the Narcotics Control Bureau, said the flow of methamphetamine was proving particularly hard to control. He suggested there could be 13 million Chinese addicts, more than four times the official tally.

[…] Last year nearly 170,000 suspects were detained for drug-related offences. This year’s campaign also shows a marked rise in confiscations from previous anti-drug efforts. A 50-day campaign in 2004 only netted around five tons of drugs, compared the 12 tons seized by authorities this year. [Source]

[…] Liu claimed that the annual economic loss caused by drug abuse could be as much as 500 billion yuan (HK$631 billion).

[…] “Compared with traditional drugs, such as heroin and opium, methamphetamine can easily lead to mental problems. Addicts will be prone to extreme and violent behaviour, including murder and kidnapping” [said Liu].

[…] Another top drug official, Song Zengliang, blamed the influx of methamphetamine from Southeast Asian countries on a rise in violent crime. [Source]

A separate report from the South China Morning Post notes that the southern port province of Guangdong is the main target of the ongoing drug crackdown. Hu Huifeng and Mimi Lau report:

The southern province is the mainland’s biggest market for illicit drugs and has developed a clan-based industry for the manufacture of synthetic narcotics, especially Ice, or methamphetamine, some experts say.

It also has the biggest population of addicts, with about 457,000 people on a register of suspected users, according to the provincial public security department.

The total has been growing by about 40,000 people a year since 2009, the China News Service reported.

[…] Peng Peng , a researcher at the Guangzhou Academy of Social Sciences, said that unlike traditional drugs such as heroin and opium, most of which were imported, production of Ice had developed into a local industry.

He said the industry was protected by local officials and drugs made in Guangdong were sold across the province and country.

“One or two campaigns will not be able to eliminate an industry in which so many local people make a living,” Peng said. [Source]

For more on illegal drugs in China, see prior CDT coverage.