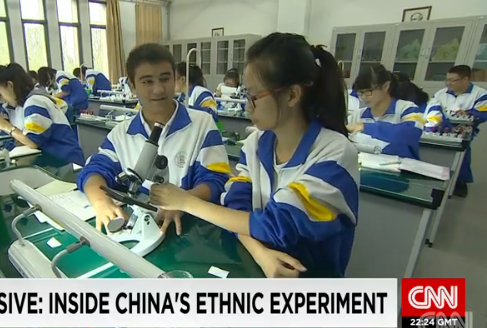 […F]rom its inception, the Xinjiang class had an overtly political purpose. Education Ministry documents repeatedly call on the program to educate minority students to “defend the unity of China” and “safeguard national security.”

“We are not just educating them, we are cultivating their love for the country,” Li admits.

The same could be said for any classroom in Communist China, but for the Xinjiang class, the political indoctrination appears to take on a special urgency.

“The political goal is to try and create a patriotic ethnic minority cadre pool that will hopefully go back to Xinjiang and serve the Party state,” says Professor James Leibold, a political scientist at Australia’s Latrobe University.

He says the Party could be failing. […] [Source]

Also see “Learning to Forget Tibet in China,” on Tibetan blogger Woeser’s experience in the 1980s in a similar “Help Tibet” campaign.