China Gets Even Colder for Reporters 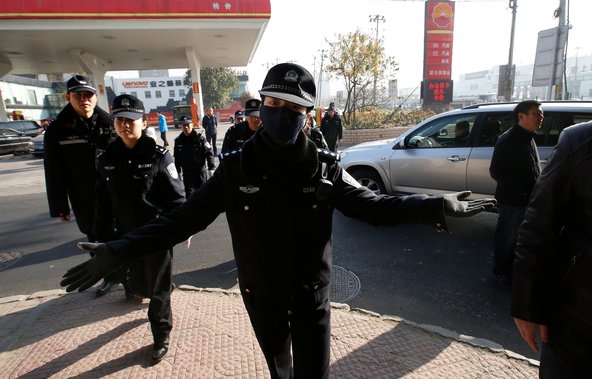 The Chinese government’s control over domestic journalists has only intensified since Xi Jinping became president in 2012, and the country is now the world’s leading jailor of journalists, according to the Committee to Protect Journalists. While foreign reporters working in China generally operate with more freedom than their Chinese counterparts, authorities are tightening their reins as well through a variety of intimidation tactics, according to a report by Andrew Jacobs in the New York Times:

Many foreign correspondents say it is increasingly difficult to carry out their work here. Tibet remains off limits, and the volatile western region of Xinjiang has effectively become a no-go zone, with police harassment making it nearly impossible to investigate the bloody clashes between ethnic Uighurs and Chinese security forces that claimed hundreds of lives in 2014.

Earlier this week, the Foreign Correspondents’ Club of China published a harrowing catalog of recent incidents that suggest a creeping intolerance for photographers, reporters and video crews working in places that are officially open to foreign journalists.

In recent months, more than a dozen correspondents have been roughed up, detained or shadowed by plainclothes police officers as they tried to work in far-flung provinces as well as the heart of the nation’s capital. In October, one wire service reporter said he was manhandled, chained to a metal chair and held for more than 14 hours after he attempted to conduct interviews at the main petition office in Beijing. The reporter refused to strip down for a physical exam but was forced to submit to a drug test and then falsely accused of injuring one of his interrogators. As retribution, the Foreign Ministry issued him a six-month press card, not the one-year card that is usually pro forma.

[…] In many ways, the growing intolerance of foreign journalists mirrors the hostility experienced by civil society groups, liberal academics and rights defenders under the two-year-old administration of President Xi Jinping. In internal speeches and editorials published in the state-owned news media, the Communist Party has characterized Western reporters as ‘‘hostile foreign forces’’ seeking to subvert single-party rule. [Source]

A number of foreign reporters who tackled politically sensitive subjects have seen their China visa renewals denied. In November, during a press conference with President Obama, President Xi implied that foreign journalists who had not been granted visas to work from China were themselves to blame.