Xi Blames Journalists as Press Left Out of Visa Deal 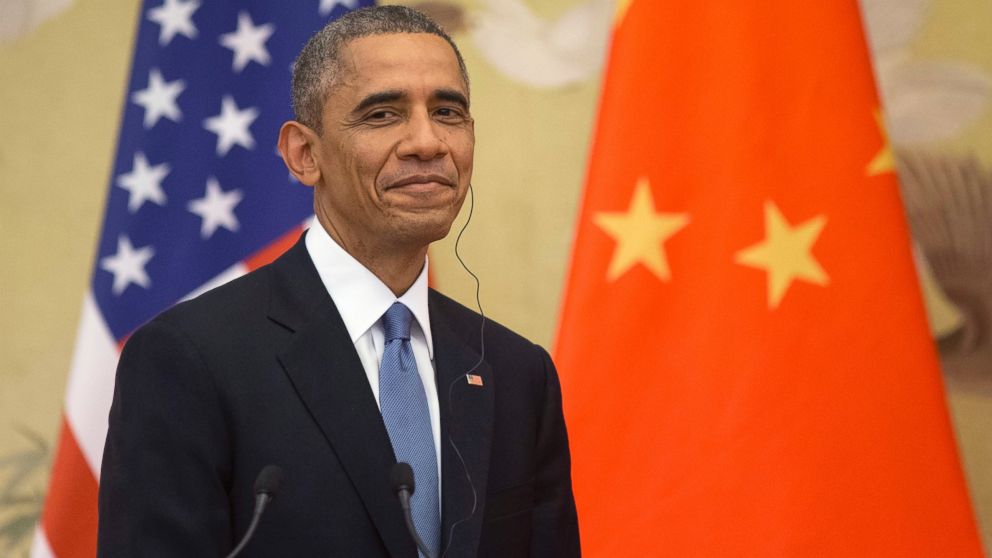 At a joint press conference with his American counterpart on Wednesday, President Xi Jinping dismissed a recent burst of anti-Western rhetoric in China’s official media. Sino-U.S. partnership, he declared, should be “an anchor of world stability and a propeller of world peace.” The two countries demonstrated this spirit of cooperation this week with the announcements of new, longer visa terms for travelers between them, alongside a flagship agreement on carbon emissions. Like the press conference itself, these were the product of protracted negotiations: “a process,” one administration official told The Wall Street Journal, “of setting boundaries and then gradually narrowing in on where you can make progress.” American officials claimed that the visa deal would “inject billions (of dollars) in the U.S. economy and create enough demand to support hundreds of thousands of additional U.S. jobs.” Despite some doubts, the scheme got off to a swift and loudly trumpeted start:

But at FOX News on Monday, Greta Van Susteren complained that one major visa issue had gone unaddressed:

Visa restrictions have plagued reporters at the New York Times, Bloomberg, Reuters. China once denied me a transit visa. That meant I could not change planes in the Beijing airport. And I was not seeking to stay in China or report a story. I just wanted to change planes to go on to North Korea. They would not let me.

Now, President Obama is going to reportedly bring up the issue of the journalist visa with the Chinese. But It’s a little late. He has already signed the visa deal. After the facts, it seems pretty late to me. So right now, what we have a lopsided deal that favors the Chinese. [Source]

The question of journalists’ visas returned to the forefront on Wednesday. Many foreign reporters, particularly those from organizations which had exposed the hidden wealth of Chinese leaders’ families, experienced unexplained delays in applications for new documents last winter. One, The New York Times’ Austin Ramzy, was forced to leave the mainland, and is now based in Taipei. Chinese authorities said that this was due not to retaliation against the Times, but to mishandling of paperwork as Ramzy moved there from TIME magazine.

With the annual renewal season approaching once more, the Times’ Mark Landler asked Xi whether delays and denials of journalists’ visas are likely to continue:

After first taking an unrelated, clearly scripted, question from a state-owned Chinese paper — which drew a quizzical facial expression from Mr. Obama — Mr. Xi circled back, declaring that the visa problems of the news organizations, including The Times, were of their own making.

Mr. Xi insisted that China protected the rights of news media organizations but that they needed to abide by the rules of the country. “When a certain issue is raised as a problem, there must a reason,” he said, evincing no patience for the news media’s concerns about being penalized for unfavorable news coverage of Chinese leaders and their families.

The Chinese leader reached for an unexpected metaphor to describe the predicament of The Times and other foreign news organizations, saying they were suffering the equivalent of car trouble. “When a car breaks down on the road,” he said through an interpreter, “perhaps we need to get off the car and see where the problem lies.” [Source]

Xi added that “removing the bell requires the person who attached it,” a phrase with rather different connotations in Chinese and in English. China’s ambassador to the U.S. Cui Tiankai expressed a similar position in a recent interview with Foreign Policy, but suggested that progress on broader visa issues might help. Xi’s comments following the new visa agreement appear to squash any such hope.

People ask if it's worth paying big bucks to cover Obama in far away locales. His presser w/Xi was moment when being in room felt necessary.

Yes you could watch on TV (sort of). But in room it felt really jarring when Xi first ignored @MarkLandler's question.

Then it did feel ominous when Xi grew more forceful in his tone and cryptic in his metaphors. After, WH press and Obama aides were stunned.

And reporting was amplified by watching WH aides work for days on access to Xi, have high hopes and then sit thru that performance.

The response from the Times’ editorial board was blunt:

The Times has no intention of altering its coverage to meet the demands of any government — be it that of China, the United States or any other nation. Nor would any credible news organization. The Times has a long history of taking on the American government, from the publication of the Pentagon Papers to investigations of secret government eavesdropping.

The Times’s commitment is to its readers who expect, and rightly deserve, the fullest, most truthful discussion of events and people shaping the world.

China, with 1.3 billion people and the world’s second-largest economy after the United States, is a major force regionally and internationally and merits serious coverage. The Times will continue to give the country and its citizens honest reporting and attention. Mr. Xi claimed that China protects the rights of media organizations. Demanding that journalists tailor their coverage to suit the state only protects the powerful and those with something to hide. A confident regime that considers itself a world leader should be able to handle truthful examination and criticism. [Source]

Also at the Times, Ravi Somaiya explained the context of the confrontation:

Mr. Xi’s comments formalize a shift in the Chinese government’s approach, said Orville Schell, the director of the Center on U.S.-China Relations at the Asia Society, and a longtime scholar on China. “There is a fundamental contrast between Western notions of the role of the press as a watchdog institution and Chinese, Maoist notions of the press as essentially a megaphone of the party and state,” Mr. Schell said.

Over the last 20 or 30 years, he said, that distinction has been less defined, as the Chinese permitted more robust coverage by Western journalists. “But I think under Xi we’re beginning to get something of a return to a more traditional Maoist notion not only of the media, but of arts and culture.”

The Arab Spring of 2011 marked a turning point, said Evan Osnos, a staff writer for The New Yorker who until recently covered China for the magazine, and for The Chicago Tribune before that. Chinese leaders watched authoritarian governments fall with very little warning, he said, and decided that “there were all of these latent threats to their political stability that had to be controlled.” [Source]

For now, as Erik Wemple described at The Washington Post, the apparently indefinite visa suspensions leave the Times in “quite a bind”:

The translation here is that the New York Times reporters with pending visa applications for China should keep their bags in the closet. There are about six such folks, including Philip Pan, Chris Buckley, Austin Ramzy, Javier Hernandez, plus a photographer and a videographer. The newspaper reports no progress in the visa applications for those staffers.

[…] The New York Times has a number of correspondents now working in China, including Edward Wong, Jane Perlez, Andrew Jacobs, David Barboza (based in Shanghai) and others. The visa backlog places each of these correspondents in an unenviable professional position: Should they leave their posts, they can be pretty sure at this point that their editor won’t be able to replace them. So several are hanging on past the New York Times’s standard four-to-five year foreign correspondent term, according to New York Times international editor Joe Kahn. “We’re a little bit hostages,” Kahn tells the Erik Wemple Blog, referring to the professional pickle of his people (and not using “hostage” in any literal sense). “Some of our correspondents are okay with staying longer, others are willing to stay for a little longer but are also thinking about other assignments.” [Source]

While Xi butted heads with American media, Obama faced raised eyebrows at his engagement with China’s after answering written questions for state news agency Xinhua ahead of the visit. Politico’s Josh Gerstein explained the objection to such canned interviews, which are favored by both Zhongnanhai and the current White House:

The move is a curious one since similar written interviews then-Vice President Xi Jinping granted to the Washington Post in 2012 and then-President Hu Jintao gave to the Post and Wall Street Journal in 2011 resulted in criticism that those outlets were manipulated by the Chinese government into publishing propaganda.

[…] “In publishing the transcript, which was more press release or propaganda than news, The Post set a bad precedent with the authoritarian government in Beijing,” ombudsman Patrick Pexton wrote.

[…] Several foreign reporters told POLITICO the pre-trip written interview is indeed an established practice of the Obama White House, but one they have vigorously objected to, unsuccessfully seeking in-person exchanges with the president. They say roundtable presidential interviews with news outlets from countries the president is about to visit were common under Obama’s predecessors.

Most journalists frown on the practice of written interviews because they preclude spontaneous follow-up questions and because there’s no way to know whether the responses actually came from the interviewee or were generated by one of his or her media handlers. [Source]

[… W]hen we go on trips, this is something we do everywhere. As you know from covering us, we tend to do written interviews with outlets when we arrive in a country.

Our view is on the one hand, we need to engage. And the more the President’s voice can be heard in a country the better because people understand where we come from. So we do engage Chinese media. We engage CCTV in the Briefing Room every day. We engage Xinhua.

At the same time, we’ll raise issues of press freedom. And the President has raised it directly with President Xi in their believe meetings. We’ve raised our concerns about the status of some U.S. media organizations and the treatment – the adjudication of their visas. We’ve raised, again, our concern on having more free access to information here – not just as it relates to the news media, but as it relates to Internet.

So these are things that we will consistently raise, but again, I think better for the President’s voice to get out and to be heard in a country. […] [Source]