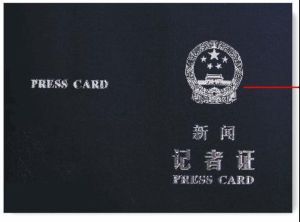 With expulsion looming, the Chinese government renewed press credentials Thursday for all Bloomberg News journalists and some New York Times journalists currently in the country.

The granting of press credentials is a positive development amid heightened concerns about the ability of U.S. news outlets to report independently in the authoritarian country. Roughly two dozen Times and Bloomberg journalists are facing expulsion from the nation by the end of 2013 due to expiring residence visas.

[…] Edward Wong, a Times correspondent in China, tweeted Thursday that while some Times colleagues have received new press cards, none have yet received their residence visas.

A Times spokesperson did not immediately respond for comment.

“We have received all of our China press cards and continue to operate as usual,” a Bloomberg spokesman told HuffPost. [Source]

Renewed press credentials don’t guarantee that reporters will be allowed to remain in China, but are necessary for them to apply for their residence visas. Bloomberg and the New York Times have been targeted by the Chinese government after each publication released investigations into the family wealth of CCP leaders Xi Jinping (Bloomberg) and Wen Jiabao (NYT). While Bloomberg was recently criticized for exercising self-censorship in effort to remain in China, The Times published a report on business dealings between a company run by Wen Jiabao’s daughter and JPMorgan Chase. In November, veteran China journalist Paul Mooney’s visa application to begin reporting for Thomson Reuters was denied, adding to foreign correspondents’ concerns over their status in China.

In recent years, Beijing has made efforts to expand its international media presence, and many Chinese journalists now operate in the US for China’s state-run media organizations. In 2011 Congressman Dana Rohrabacher introduced the Chinese Media Reciprocity Act, which was voted down in the House of Representatives last year. In recent Washington discussions on how to deal with the current visa dilemma, retaliatory visa restrictions were again suggested. At the Atlantic, Matt Schiavenza outlines the debate around media reciprocity, and argues that it would do little more than damage the US’s reputation:

China’s crackdown on The Times and Bloomberg has come at the expense of the country’s international reputation, but it seems, as The New Yorker’s Evan Osnos has written, that China is less committed to soft power than it once was. As a result, it’s unlikely that a reciprocal push against U.S-based Chinese media, while damaging to Sino-American relations, would force any movement on the Chinese side. “We will likely never win a tit for tat against the Chinese government, simply because they are willing to go much further than us,” Robert Daly, a China expert at the Wilson Center, told me. “We would be playing the game on their terms.” Given their investments in expanding their media presence in the U.S, China would have a lot to lose from reciprocity. But the alternative, Beijing figures, would be far worse.

So the United States faces an unappetizing choice: either pursue a policy of reciprocity that won’t work and will probably backfire, or simply do nothing. But however this incident turns out, it’s time to acknowledge that media repression in China is probably going to get worse before it gets better. Speaking out against Chinese treatment of foreign journalists, as Vice President Biden did this month, won’t coerce the Communist Party to loosen its crackdown. But punishing Chinese journalists for a situation beyond their control not only won’t work, but would signal to the world that the American commitment to free speech is skin deep. [Source]

For more background on the uncertain future of foreign media in China, see “What’s Next for Foreign Media in China,” or  “Washington Post Hacked as Visa Limbo Continues,” both via CDT.