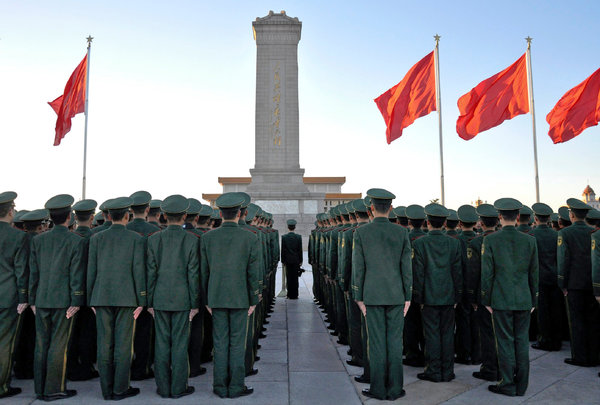 The Washington Post has revealed a recent intrusion into its servers, for which China is a chief suspect. From Craig Timberg:

Post officials, who on Wednesday learned of the intrusion from Mandiant, a cybersecurity contractor that monitors the company’s networks, said the intrusion was of relatively short duration.

“This is an ongoing investigation, but we believe it was a few days at most,” said Post spokeswoman Kris Coratti.

[…] The company’s suspicions immediately focused on the possibility that Chinese hackers were responsible for the hack. Evidence strongly pointed to Chinese hackers in a 2011 intrusion of The Post’s network and in hacks against the New York Times, the Wall Street Journal and a wide range of Washington-based institutions, from think tanks to human rights groups and defense contractors. [Source]

Mandiant, which released a major report in February attributing hacking attacks to a unit of the People’s Liberation Army, also worked with The New York Times following its hacking in late 2012 and early 2013. This reportedly began after the Times’ publication of a report on wealth accumulated by Wen Jiabao’s family during his time as premier. Recently, journalists including those of the Times and Bloomberg News, which had previously conducted a similar investigation of Xi Jinping’s family, have been subjected to unusual delays of their annual visa renewals. In an open letter to Xi on Saturday, Times columnist Thomas Friedman warned against punishing foreign media for their work:

China experts tell me that this unprecedented crackdown is prompted by your feeling that we’ve crossed a red line. You apparently thought the rules of the game were that the foreign press, local media and social media could write anything they wanted about corruption and social protests at the local and provincial level — indeed, it was a way for the central government to track and curb corruption — but that such focus should never be brought to the financial dealings of the top leaders of the Communist Party.

[…] President Xi, you are right that exposure of huge, high-level asset grabs poses an existential threat to your party’s rule. But you’re wrong if you blame those exposing these excesses rather than those perpetrating them. [Source]

China’s Global Times responded that it was not for Western media to dictate political priorities to Beijing:

Friedman supposedly understands China well. He should have known that information security is among China’s core security concerns. China is willing to communicate with the world, but it won’t yield its own agenda-setting rights to the Western media.

Friedman should understand that Chinese authorities are breaching their duty if they allow Western media to work in China unchecked.

[…] China should have its own judgment. The Western media will have an advantage in public discourse for a long time and would like to become a force that can influence China. But they will be challenged by our wisdom and determination. [Source]

The Times’ Didi Kirsten Tatlow reported signs that weibo users’ wisdom and determination was being suppressed, however:

Searching for reactions to Mr. Friedman’s piece on the closest thing China has to a town hall, the blogosphere, turned up only 11 results on Sina Weibo, the popular microblog platform. That’s somewhat surprising. Mr. Friedman’s book “The World Is Flat” is widely known among China’s educated elite, many of whom use Weibo.

A paucity of posts on a high-profile topic often indicates censorship, so to test that, we tried to post on Mr. Friedman. The post was rejected by Sina Weibo with a message it had been hidden because it was “not appropriate” for open viewing, indicating the topic is currently censored. [Source]

Although Friedman raised the scenario of a total expulsion of all foreign press, many believe that at least some visas will eventually be granted, and that the authorities’ goal is to tame rather than drive out the foreign media as a whole. Reuters’ Paul Mooney, who was himself recently denied a visa, told Voice of America’s Cecily Hilleary:

[…] I’m confident that most of my colleagues in Beijing didn’t self-censor.  But the pressure is always there and you are always looking over your shoulder. […]

[…] How many reporters over the next year, after seeing about what happened to me or Melissa Chan of Al Jazeera, who was kicked out a year ago or some two dozen Bloomberg and New York Times reporters having [?] visas, how many more journalists are now going to be even more inclined to be careful about what stories they choose?

[…] I think it’s a game of chicken.  I suspect that they’ll give them these visas, but they will wait until the final day or the day before the visas expire.  They’ll feel that they’ve shown journalists that they’re in control, that they can hold the visa over you, and they will feel that people were intimidated by this.  It’s a warning. [Source]

In a look ahead to 2014 at The New Yorker, Evan Osnos similarly commented that “I may be wrong, but I predict that they will stop short of the full-scale eviction: they will approve some of those visas and leave others in purgatory in order to avoid retribution against Chinese visa-seekers in America. But this issue is not going away.” At The Atlantic, his father Peter Osnos wrote in an overview of adverse reporting conditions in China, Russia and the U.S.:

As for the New York Times, it is hard to imagine the Chinese choosing to shut out the world’s most prestigious news organization. But so far, every effort by the Times to engage the Chinese in talks about a resolution has apparently failed. China’s inclination to bully the foreign media is a discouraging symbol of its central contradiction—a dynamic economy and an authoritarian internal security apparatus—that, for now, is proving to be a shameful throwback to an earlier era. [Source]

At South China Morning Post, Alex Lo asked why the Wen and Xi family fortunes had been exposed by Bloomberg and the Times, rather than by Hong Kong or Taiwanese organizations.

At this point, my pan-democrat critics will scream, “self-censorship”. I am sure there is an element of that.

But we are talking about dozens of news organisations here. Self-censorship for all of them? That would be more effective than state censorship. I think a more insidious reason has to do with the relative low pay and social prestige of local reporters, at least relative to the foreign media. This means it’s hard to retain those who have shown real talent, drive and courage. When you pay peanuts, you get monkeys. Those who prove to be no monkeys but lions quickly jump ships and join the more prestigious – and far-better paid – foreign news groups.

But you can argue that low pay is a form of self-censorship. [Source]

[…] While the world sees these actions as undermining China’s effort to build soft power, they may not, in fact, be as inconsistent with China’s charm offensive abroad as they seem. Both strategies together shed light on Chinese leaders’ particular view on how soft power should work, their approach in pushing it, and why they have not had much success making it appealing to the rest of the world.

[…] China’s attempts to censor the world are nothing new, as scholars and journalists have pointed out recently. It is now happening more frequently, both as a result of the government’s growing fear of domestic instability, and its increasing confidence on the world stage. China hopes to apply its calculated, top-down approach to soft power to the world, and increasingly believes it can make the world comply. What it would actually accomplish, after stifling its civil society at home where true soft power could be born, is alienating its admirers and observers abroad, who are among the keenest to make the country known to the world. [Source]

Meanwhile, the situation of China’s own journalists is even bleaker.