32 Journalists in Prison amid Tightening Restrictions 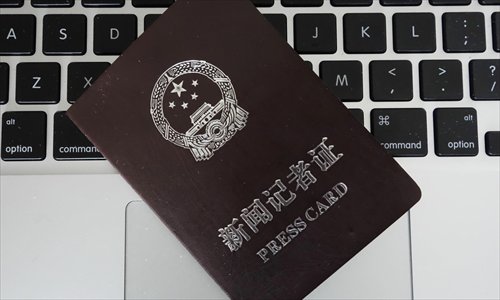 Journalists in China will be required to undergo an intensive training and examination process in order to obtain certification to work in the media. While a similar certificate was issued in 2010, the new exam will be more difficult and will focus on adherence to the “Marxist view of journalism,” among other things. The Global Times reports:

Fang Fang (pseudonym), a reporter at a Changsha-based newspaper, is one of the 250,000 journalists who must pass the national exam for journalism certification to be held next year, despite already holding a certificate issued in 2010. Media experts say this indicates the government strengthening its already-tight management after a series of scandals involving journalists taking bribes this year.

Fang’s newspaper has arranged thrice-weekly training, eating up an hour of the workday every time, since October. But Fang says she isn’t confident about the results. “Judging from the training materials, the exam in 2014 is more difficult than the one in 2009,” Fang told the Global Times. “I feel somewhat stressed about it.”

[…] The training and exam target all reporters, urging them to adhere to “Marxist view of journalism,” build the core values of socialism and to obey relative laws and regulations, providing better reports for the people, the Party and the country, Men Lijun, an official with the newspaper department of the administration, told people.com.cn in October. [Source]

The “Marxist view of journalism” is a phrase often used by the Propaganda Department to emphasize journalists’ subservience to the Party line. The concept is explained in this 2007 post from the China Media Project. In August, reporters were required to attend Marxism classes, a move that coincided with the launch of a crackdown on dissent and the detention of numerous journalists, activists and bloggers.

Reporters who don’t follow the Party’s dictates in carrying out their profession face a range of consequences, including imprisonment. The Committee to Protect Journalists has found that 32 journalists are currently in prison in China for various offenses, including several who were detained in this year’s crackdown. From CPJ’s annual prison census:

Intolerant governments in Ankara, Tehran, and Beijing used mostly anti-state charges to silence a combined 107 critical reporters, bloggers, and editors. Turkey and Iran retained their distinctions as the worst and second worst jailers for two years in a row, despite each having released some prisoners during 2013. The number detained by China held steady.

[…] Thirty-two reporters, editors, and bloggers were imprisoned in China, the same number as in 2012. Although journalists including CPJ’s 2005 International Press Freedom Award winner, Shi Tao, were released during the year, a fresh crackdown on Internet criticism, especially allegations of corruption, led to several new arrests beginning in August. [Source]