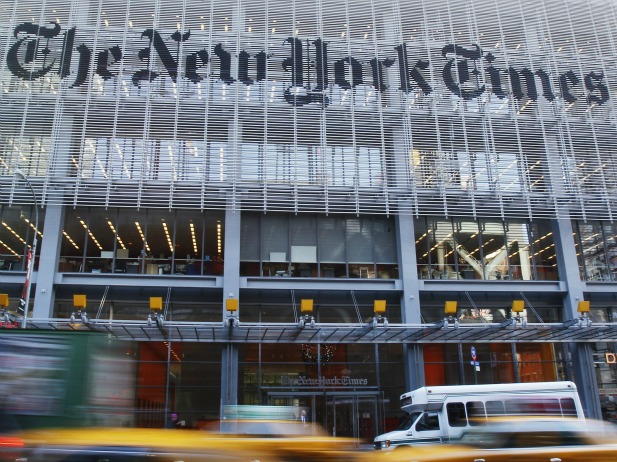 Delays in annual renewals of China correspondents’ visas have sparked fears of an impending mass expulsion, particularly of journalists at Bloomberg News and The New York Times. From David Nakamura and William Wan at The Washington Post:

“It’s an unfortunate situation,” New York Times executive editor Jill Abramson said in a telephone interview. “We’re eager to work with Chinese officials to have our visas renewed as we have in past years.” But Chinese authorities have told Times journalists that their visas “are not being processed,” she said, and the government has complained to the paper about its stories on the vast wealth accumulated by Chinese “princelings,” top Communist Party members, bureaucrats and their relatives, saying the reports have been unfair and disrespectful of Chinese law.

[…] Journalists at the Times bureau, who spoke on condition of anonymity for fear of government reprisals, said that none of them have received visas. Many are not even able to apply for a visa because their press cards have not been renewed yet.

The few whose visa applications were successfully accepted were told in recent days by the government to pick up their passports without a new visa inside.

[…] When one New York Times journalist tried to pick up a new press card […], the reporter was told by a government bureaucrat that the card was not ready even though it was in full view on the official’s desk, according to journalists at the Times. [Source]

The targeting of Bloomberg and the Times is the latest retaliation for their 2012 exposés of the family wealth of Xi Jinping and Wen Jiabao, respectively. A defiant follow-up at The Times last month, focusing on Wen’s daughter’s dealings with JPMorgan Chase, appears to have prompted its current visa difficulties. Bloomberg has been accused of heading in the opposite direction, allegedly self-censoring to avoid antagonizing Chinese authorities. But its editor-in-chief’s comparison of reporting conditions in China with those in Nazi Germany brought down recent surprise “security inspections,” and the exclusion of journalist Robert Hutton from a joint press statement by Li Keqiang and visiting British prime minister David Cameron on Monday. Cameron subsequently raised the latter incident with president Xi Jinping, who said he knew nothing about it.

U.S. vice president Joe Biden also brought up the visa delays during his visit this week, later meeting with journalists to discuss the issue. According to The New York Times’ Mark Landler, however, there was no immediate sign of results:

Reporters in the meeting said Mr. Biden told them that he had warned Mr. Xi, in a formal session and over dinner, that there would be repercussions for China, especially in the United States Congress, if it forced out journalists. But he said the Chinese leader appeared unmoved, insisting that the authorities treated reporters according to Chinese law.

[…] The Chinese foreign ministry said Thursday that it managed foreign reporters “according to law and regulations.” A spokesman, Hong Lei, said, “Over the years, we have provided a very convenient environment for foreign correspondents to conduct interviews in China.”

“As for foreign correspondents’ living and working environments in China,” Mr. Hong added, “I think as long as you hold an objective and impartial attitude, you will arrive at the right conclusion.” [Source]

At the Council on Foreign Relations, Elizabeth Economy asked how far Washington would be willing to push the matter:

[…] The question now is whether the U.S. government will take further steps to pressure China on this issue. Would Washington be willing to delay the visas of Chinese journalists? Is there an issue of market access that could be advanced through the World Trade Organization? It may seem foolish to risk the overall relationship with China for such issues: The ADIZ, for example, represents a more immediate threat to regional security than access to China for U.S. journalists. However, the political values the vice president is advancing—transparency, openness, and accountability—in the final analysis are reflected not only in the way that China does business at home but also in how it behaves abroad. Vice President Biden is right to hold China to account on both fronts. [Source]

China Law and Policy’s Elizabeth M. Lynch explained the visa renewal process in a broader overview of recent restrictions, including the denial of a visa for Reuters’ Paul Mooney:

What Mooney labels “childish” behavior – the use of the visa process to ostensibly chill the foreign press – appears to have become a strategy that the Chinese government is more quick to employ. Which it can do on an annual basis. For resident journalists in China, the journalist visa (“J-1 visa”) is only good for a year, expiring every December. Beginning in November, every resident foreign journalist begins the renewal process, first re-applying with MOFA for a press card and then, once obtaining the press card, renewing her J-1 visa with the PSB. But what should be a routine event has turned into an anxiety-ridden affair.

[…] In its November 2012 survey, the FCCC found that since the end of 2011, at least 29 resident foreign correspondents were threatened with a visa non-renewal. The respondents’ quotes (119 FCCC members responded to the survey) show that some of these threats were linked to specific reporting or journalists’ “attitude.”

Currently, all of China’s resident foreign correspondents are undergoing the visa renewal process. In a phone interview with China Law & Policy, Peter Ford, president of the FCCC, said that it was just too early to draw any conclusions from the 2013 process as it is ongoing but he did note that “reporters for media which have displeased the authorities appear to be facing unexpected delays.” [Source]

The delays may well be merely a warning, rather than the prelude to a mass expulsion. At the very least, though, they will wreak havoc on Christmas travel plans: the visa stage can now take up to three weeks, during which applicants’ passports are held by the Public Security Bureau. In the longer term, the threat serves as a reminder of “the anaconda in the chandelier,” encouraging conscious or unconscious self-censorship. Lynch addressed a past case of apparent visa-linked self-censorship in the second part of her series at China Law and Policy: a 2009 Washington Post article on Falun Gong in the U.S. which was cancelled as the newspaper fought to obtain a visa for its correspondent Andrew Higgins. His visa, however, never came.

Why does this keep happening? Why does each media company think that it will be the exception? It is the lack of unity among the major media outlets in dealing with the Chinese government about their journalists’ visas that is a weakness. Each thinks it can make its own compromise with Beijing. And that is their second fallacy: seeking compromise. Compromise is not usually what authoritarian regimes do. Control and domination – like the Chinese government’s relationship with its domestic media – is the usual end game. Even with a united front, this is likely not a battle that the Western media can win on its own. [Source]

It is questionable, though, whether larger-scale exclusion of journalists would serve even China’s interests. Robert Daly of the Wilson Center in Washington told the AP that already, “China’s soft power is taking a very hard, self-inflicted hit. It would be helpful to China to get a broader more complete narrative about China out there.” Expulsion would likely have exactly the opposite effect. Discussing the government’s media blackout in Tibet, Kristin Jones wrote last year at the Committee to Protect Journalists that denying reporters access had done nothing to steer the narrative in Beijing’s favor:

Placing travel restrictions on journalists may have one unintended effect. It means that when it comes to unofficial news from China, activists and advocacy groups play a vital role in collecting and disseminating information.

Chinese authorities are hard on activists–even harder than they are on journalists. But by preventing reporters from doing their jobs, Chinese officials all but guarantee that activists are the ones reporting the news. [Source]

Updated at 22:55 PST: Mark Landler and David E. Sanger’s New York Times article has been updated with more details on the American response and the gradual chilling of the climate for foreign journalism in China:

[… I]n interviews over several weeks, American officials have acknowledged that their options for pressuring the Chinese are limited. While they could cancel the visas of Chinese correspondents, one administration official said “that could be counterproductive, because we want more reporting about the United States to become available in China.”

Visa approvals for Chinese news media executives trying to visit the United States could be slowed, officials say, or the administration could initiate trade actions in response to China’s decision to block the English and Chinese-language websites of Western news organizations. Yet so far there appears to have been little work done on preparing such actions, and it is unclear whether they would succeed. […]

[…] [Biden’s] decision to go public was a reflection, officials said, of the far more aggressive posture China has taken toward foreign journalists over the past two or three years. To some degree that reflects a shift in Chinese diplomacy: In the late 1980s and early 1990s, when Japan began its slow decline and a large international press corps began to migrate to Beijing and Shanghai, the Chinese often tried to court foreign reporters. [Source]

SIEGEL: Well, how unusual is it for Beijing to, in effect, expel large numbers of the press corps? Has it happened before?

FOLKENFLIK: Well, not at this number. You know, and we should stress it’s a threat. It hasn’t occurred quite yet, although the days are ticking down to the end of the year. But there are incidents and moments where one can look to, you know. If you think of John Burns and other journalists, John Burns famously for the New York Times.

You know, he took a motorcycle, if I’m remembering correctly, and took a jaunt across China into regions that took him to cities that were off limits unless you had specific permission from the Chinese authorities to travel to. So, too, were several correspondents thrown out of China after, you know, Tiananmen Square and coverage there in 1989.

You know, there are moments like this, but nothing at this scale or at this moment, nothing where the Chinese are essentially saying, you know, we’re willing to revert to almost conditions before the thaw of these two countries, back in the ’70s. [Source]