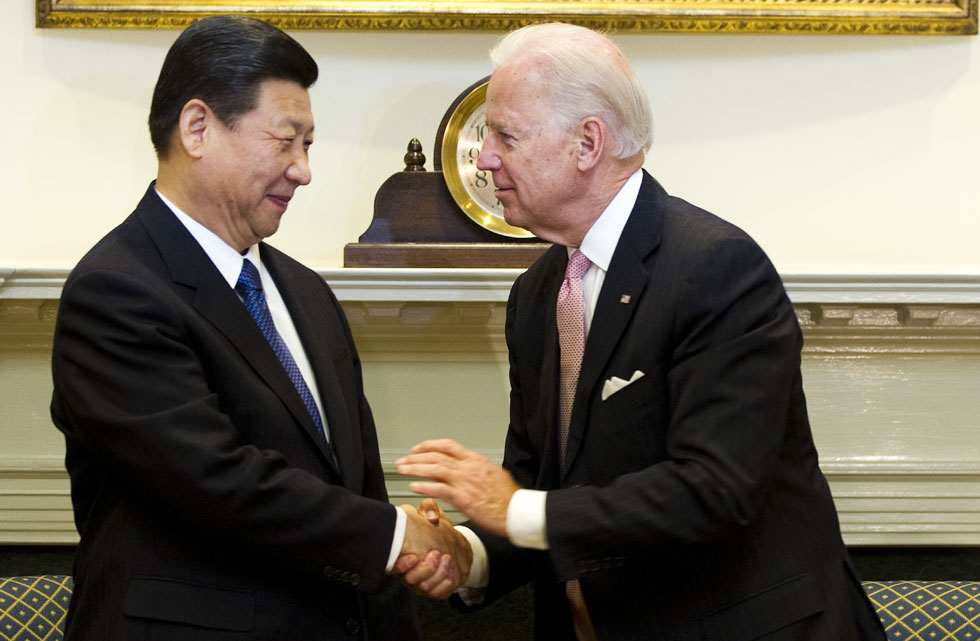 U.S. Vice President Joe Biden arrived in China today amid international concern about China’s recently announced Air Defense Identification Zone (ADIZ) over the East China Sea—a zone that American, South Korean, and Japanese military planes have all breached since China announced it on November 23. The ADIZ covers islands claimed by both China and Japan, and Biden’s China arrival comes after visiting Tokyo on Monday—the premier stop on his weeklong tour of Asia. Shortly after Biden’s arrived in Tokyo, the U.S. State Department called for China to “rescind” threats against unannounced aircrafts entering the ADIZ, even as the FAA had advised all commercial U.S. carriers to comply with Beijing’s requests. A post from the American Interest notes that these mixed messages may be confusing Asian allies of the U.S.:

Washington needs to get its ducks in a row. The different branches of the US government can’t be sending out mixed messages. Our allies in Asia are watching very closely to gauge the depth of the US commitment to stability in Asia. Diplomatic missteps, confusion, mixed messages, and incompetence will only further convince our allies that the US ship has sailed. [Source]

While in Tokyo on Tuesday, Biden spoke out strongly against China’s ADIZ, and announced his intention to voice these concerns in Beijing. From the AP:

Standing side by side in Tokyo with Japanese Prime Minister Shinzo Abe, Biden said the U.S. is “deeply concerned” about China’s attempt to unilaterally change the status quo in the East China Sea.

“This action has raised regional tensions and increased the risk of accidents and miscalculation,” he said.

Biden said the U.S. is coordinating closely with allies Japan, South Korea and others, adding that the U.S. has an interest in lowering tensions in the region.

“I will be raising these issues with great specificity when I meet with Chinese leadership the day after tomorrow,” Biden said. [Source]

More coverage from the AP notes that China’s Defense Ministry reasserted commitment to the ADIZ  just as Biden was touching down in Beijing:

As if to make a point that the newly declared air defense zone will be a major topic of Biden’s talks with the Chinese, China’s Defense Ministry issued a statement reiterating the country’s determination to enforce the zone just as the vice president was arriving in Beijing on Wednesday. China’s military is “fully capable of exercising effective control” over the area covering the disputed islands in the East China Sea, said ministry spokesman Geng Yansheng. [Source]

In a report providing context on ADIZ tensions as Biden arrived in Beijing, Reuters relays official remarks made by the leaders during their 5 1/2 hrs of meetings, noting that neither leader specifically mentioned the ADIZ in statements to the press:

“In developing this new relationship, both qualities are sorely needed,” Biden said during a meeting in Beijing’s Great Hall of the People.

“Candor generates trust. Trust is the basis on which real change, constructive change, is made.”

“Regional issues keep cropping up and there are more pronounced global challenges such as climate change and energy security. The world is not tranquil,” he added.

Neither made any mention of the air defense zone in remarks before reporters. Biden flies to Seoul on Thursday. [Source]

The New York Times reports that while diplomatic tension regarding the ADIZ have overshadowed the larger agenda for Biden’s Asia tour, the two leaders did touch on other topics while in meetings:

For Mr. Biden, however, China’s sudden action last month upended what was meant to be tour of Asia with a wide-ranging agenda. Instead, he has had to walk a fine line: defending an ally and rebuking a potential adversary, while preventing a spat over a clump of islands in the East China Sea from mushrooming into a wider conflict.

[…] Another major area of focus, American officials said, was North Korea, which has entered another period of uncertainty with reports that a powerful uncle of the country’s supreme leader, Kim Jong-un, had been purged from his positions. Officials declined to say whether China had intelligence on the ouster of the uncle, Jang Song Thaek.

But they said Mr. Xi displayed renewed interest in pursuing a dual-track strategy of economic pressure and diplomacy to curb North Korea’s nuclear ambitions, prompted in part by the negotiations that recently led to an interim nuclear deal with Iran. [Source]

In a ChinaFile conversation prior to the Beijing meetings, Susan Shirk expressed hopes that the leaders would move beyond the ADIZ to also cover other important issues:

I would hope that Vice President Biden will not allow the ADIZ to dominate completely his conversation with President Xi. President Xi told Treasury Secretary Jacob Lew on the day following the C.C.P. Central Committee reform decision that he wanted this reform agenda to provide new opportunities to strengthen relations with the U.S.

Vice President Biden should be asking President Xi, who took proud ownership of the reform blueprint, how he intends to implement it. What is his political strategy for overcoming the opposition of vested interests like the state owned enterprises and building a coalition of groups who would benefit from the reforms?  Does he believe that acceding to new international commitments like the Trans-Pacific Partnership, the World Trade Organization Information Technology Agreement, and the World Trade Organization Government Procurement Agreement, could provide constructive pressure for the domestic reforms?   What is the timetable for the reforms of the legal system which are essential to creating a level economic playing field and addressing widespread corruption?  How does Xi Jinping see the challenges to implementing reforms that he faces today?  And how does he see these challenges as similar or different from the challenges faced by Deng Xiaoping, who is his role model, in the 1980s and ’90’s?  Xi Jinping is trying to strengthen his authority and rule like a strong leader. Vice President Biden has a rare and valuable opportunity to hear from him directly about how he plans to use this authority to promote his domestic and international agenda. [Source]

One topic that seems not to have been breached in Beijing was the case of jailed Nobel laureate Liu Xiaobo and his wife, despite calls from human rights organizations:

A group of human rights organizations has issued an open letter calling on Vice President Joseph R. Biden Jr. to press Chinese officials on the plight of two of the country’s most prominent dissidents, Liu Xiaobo, the imprisoned Nobel Laureate, and his wife, Liu Xia, who is under house arrest and said to be suffering from severe depression.

The letter, released by Amnesty International, Human Rights Watch and the PEN American Center on the eve of Mr. Biden’s visit to China, urges him to reaffirm America’s commitment to human rights by asking Beijing to release Mr. Liu and end the harassment of his wife. Mr. Liu is serving an 11-year sentence on subversion charges, and his wife, a poet and artist, has been held incommunicado for more than three years without being charged.

[…] Advocates hope Mr. Biden’s visit will provide an opportunity to highlight deteriorating human rights conditions in China at a time when many world leaders, mindful of the country’s growing economic clout and worried about incurring Beijing’s wrath, have softened their criticism of the government’s persecution of rights activists, as well as those who advocate for political reform and greater autonomy for China’s ethnic minorities. [Source]

Vice President Biden’s trip to Asia comes two years after then-Secretary of State Hillary Clinton announced “America’s Pacific Century.” While this U.S. policy “pivot” towards Asia was met criticism in Beijing and uncertainty at home, the Obama administration seemed to become distracted by other policy priorities—both foreign and domestic. With the once vaunted policy shift stalled, some are wondering if personal ties between Joe Biden and Xi Jinping might be the diplomatic element needed to renew U.S. policy priorities in Asia:

The U.S. has gotten a little distracted in terms of putting meat on the bones of the pivot,” said Orville Schell, director of the Asia Society’s Center on U.S.-China Relations. “China has also done a number of things to try to raise the temperature in terms of tensions…It may be that while the mouse was away, the cat started to play.”

Close observers of China also say the U.S. relationship with that country is suffering from the lack of a high-profile point person on the American side who can pledge and deliver follow-through on Chinese concerns.

[…] [Former U.S. Ambassador to China Jon] Huntsman said the departure of key first-term officials like Secretary of State Hillary Clinton and National Security Adviser Tom Donilon has contributed to a sense of drift regarding U.S. China policy, but that a bigger role for Biden could improve the atmosphere.

[…] To some in the U.S., Biden might seem like an unlikely choice for delicate diplomacy. On the American political scene, he’s known for blunt-spokenness, and occasional public gaffes that have sometimes landed him in hot water with Obama.

However, some China watchers say Biden’s relaxed demeanor could work to his benefit in loosening up the often-stilted Chinese leadership. [Source]