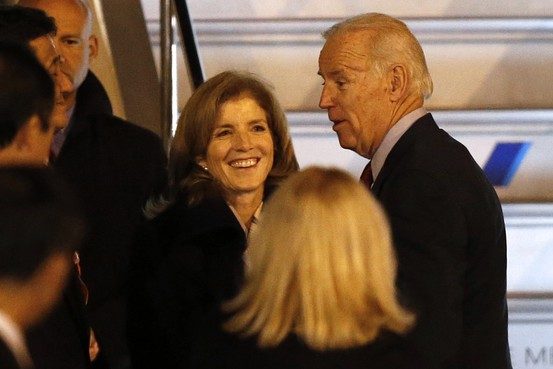 Hours after U.S. Vice President Joe Biden arrived in Tokyo on Monday evening to kickoff a week-long visit to Asia, the U.S. called on China withdraw its claims to an Air Defense Identification Zone (ADIZ) in the East China Sea. From the Guardian:

The explicit request for China to “rescind” threats against unannounced aircraft passing over a chain of islands in the East China sea was made by the US just hours after Biden landed in Tokyo ahead of a six-day trip to Japan, China and South Korea.

“The fact that China’s announcement has caused confusion and increased the risk of accidents only further underscores the validity of concerns and the need for China to rescind the procedures,” said Jen Psaki, the chief spokesperson for the State Department.

Biden, who was met at Tokyo airport by Caroline Kennedy, the daughter of former president John F Kennedy and recently appointed ambassador to Japan, is expected to attempt to defuse the controversy during his visit. [Source]

Biden will also visit South Korea and China during his Asia trip. AFP reports that the ADIZ, which prompted inconsistent responses from the United States and Japan, will top the list of issues to be discussed by Biden and Japanese Prime Minister Shinzo Abe:

Chinese analysts say the US government’s request that its civilian airlines comply with Beijing’s air defence zone was a sign of Washington’s flexibility over the contentious area. Jiang Lifeng, a former director of the Institute of Japanese Studies at the Chinese Academy of Social Sciences, said the US was reluctant to show a united front with Japan “at the expense of doing the wrong thing”.

“ADIZs have their own rules, and what the US has done is in line with global norms,” Jiang said. “It’s Japan who’s being irrational and even thuggish. The US, being autonomous, would not do the wrong thing just to appear united with Japan.”

“It would make Biden’s life a bit easier next week when he’s at the negotiating table with China,” Jiang said. [Source]

Even though the Obama administration sent a pair of B-52 bombers through the ADIZ to express its disapproval, Mark Landler and Martin Fackler of The New York Times report that the United States’ instructions to civilian carriers sent a mixed message:

The State Department quickly said that the advice did not mean that the United States was recognizing the air defense zone. And American officials have told the Japanese that the Federal Aviation Administration’s decision was a safety recommendation — far short of an order, though major American airlines said they were heeding it.

Still, a lingering ambiguity has led Japanese officials to give contradictory assessments of American intentions. On Sunday, Prime Minister Shinzo Abe told reporters that his government had confirmed through “a diplomatic route” that the United States had not asked airlines to file flight plans with the Chinese.

[…] Administration officials said earlier that Mr. Biden would leave no doubt in Japan or China that the United States views the Chinese move as a provocation and plans to disregard it, at least as far as military operations go. [Source]

One researcher told China’s state-run Global Times that the mixed response by the U.S. indicates that it may be “hedging its bets” between China and Japan as the two sides dispute the ADIZ. In a written interview Biden gave to Caixin before his Asia trip, he did not mention the East China Sea but commented on the U.S. pivot towards Asia and the prospects for future Sino-U.S. bilateral cooperation:

I believe we have made significant progress. Diplomatically, we have never had such deep and sustained high-level engagement with the leaders of the region. Our alliances have never been stronger. We have never been so engaged in the region’s institutions. Economically, we are nearing the completion of a Trans-Pacific Partnership that includes countries representing 40 percent of the global economy. And crucially, we have enhanced our dialogue and cooperation with China, through high-level exchanges and the Strategic and Economic Dialogue. This is an ambitious undertaking. Building the 21st century’s economic and political rules of the road that will allow Asian nations to thrive – peacefully and together – will be a generational project. But America has been, is now and will remain a resident Pacific power. And I strongly believe we are laying a solid foundation for strengthened U.S. engagement in the region for the decades to come. [Source]

With China’s rise inevitable, Stephen Walt writes for Foreign Policy that one of the biggest questions for the next half-century is whether the U.S. can maintain its powerful military presence in Asia or whether China can successfully drive a wedge between the U.S. and its allies. “This is what great powers do,” according to Walt:

It is hard to overstate the long-term implications of this issue. If the United States is able to maintain the status quo in Asia and help prevent China from dominating the region, then Beijing will have to focus a lot of attention on local issues, and its capacity to shape politics in other parts of the world will be constrained. By contrast, if China eventually pushes the United States out of Asia, it will have the same sort of hegemonic position in its region that the United States has long enjoyed near its own shores. That favorable position is what allows Washington to wander all over the world telling others what it thinks they should do, and regional hegemony would give Beijing the option of doing the same if it wished. It might even start forging closer ties — including security ties — with countries in the Western Hemisphere. That’s why the question of how long Beijing will tolerate the U.S. presence in Asia is so important.

Over the past five to 10 years, China’s “peaceful rise” has given way to more assertive efforts to challenge the regional status quo. There has been no formal declaration of a Chinese “Monroe Doctrine,” no announcement of a Beijing-centered “Asian Co-Prosperity Sphere,” and certainly no fiery speeches denouncing the existing order the way that Hitler used to rail against Versailles. Instead, what we’ve seen is a more gradual, low-intensity effort to challenge current arrangements and to pressure other states to accept revisions that are more to Beijing’s liking. Sometimes the object of attention is a reef or some small islands; sometimes it is a declaration of sovereignty over contested waters; and most recently, it was the unilateral announcement of an “air defense identification zone.” In each case, the goal has been to reinforce Chinese claims to particular territorial arrangements, but also to establish China’s position as the power in the region whose demands must be respected. [Source]