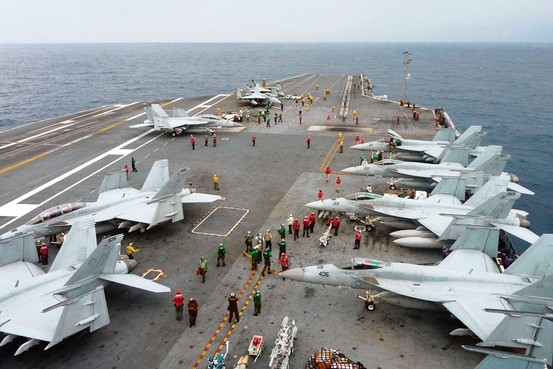 Following the flight of two U.S. B-52 bombers through China’s newly declared Air Defense Identification Zone on Tuesday, and a subsequent procession of emboldened Japanese and South Korean aircraft, China has sent mixed signals in an apparent bid to salvage international and domestic credibility. From Jeremy Page, Jeyup S. Kwaak and Yumi Otagaki at The Wall Street Journal:

China responded on Thursday to growing international defiance of its new air-defense zone in the East China Sea both by sending advanced fighter jets to the area and trying to play down any threat of military retaliation—underlining the confusion and escalated tension over the territorial dispute.

[…] China’s apparent easing of its original warning suggests its fighters will monitor and escort rather than repel U.S., Japanese and South Korean aircraft that violate the rules of the zone, which covers islands claimed by Beijing and Tokyo, said Chinese and foreign analysts. The spat over the uninhabited islands in the East China Sea—known as the Senkaku in Japan and Diaoyu in China—has escalated over the past year.

To maintain its credibility internationally and domestically, China is likely to increase such escorts, a move that in such a tense political climate greatly increases the risk of an aerial incident that could spiral into a military clash, analysts and diplomats said.

[…] China’s ambiguity may be a deliberate attempt to make the U.S. and its allies wary of continuing military flights into the zone without observing its regulations, the analysts and diplomats said. But it could also stem from poor planning and a failure to consult other countries or experts, they said. [Source]

China must now balance diplomacy against public indignation. While some Chinese have called for action against Japan, others have expressed frustration at the country’s powerlessness against the U.S.. There seems to be little room for diplomacy with Japan in any case: defense minister Itsunori Onodera said on Friday that there would be no negotiation, as that would endorse the zone’s effective claim of Chinese sovereignty over the disputed Diaoyu/Senkaku Islands. A Chinese Defense Ministry spokesman, on the other hand, gibed that China would consider lifting its ADIZ 44 years after Japan revoked its own, which has been in place for that long.

Given the longstanding assertion of both American and Japanese zones, defenders of the Chinese ADIZ have accused its critics of double standards. From, for example, Wu Liming at Xinhua (via Andrew Erickson):

Their logic is simple: they can do it while China can not, which could be described with a Chinese saying, “the magistrates are free to burn down houses while the common people are forbidden even to light lamps.”

It is known to all that the United States is among the first to set up an air defense zone in 1950, and later more than 20 countries have followed suit, which Washington has taken for granted.

[…] Japan set up such a zone in the 1960s and it even one-sidedly allowed the zone to cover China’s Diaoyu Islands. But when China set up the zone covering the Diaoyu Islands, Tokyo immediately announced it “unacceptable” and Abe even called China’s move “dangerous.” It is totally absurd and unreasonable. [Source]

It is extremely concerning to me to read a wave of negative reaction to this announcement in the Western press, despite the self-evident fact that China’s announcement amounts to a request for foreign, unknown aircraft to identify themselves to China. How can this be a negative, ‘provocative’ act? Was it equally destabilising for the US, Japan, and many others to announce identical structures? […] [Source]

[… I]n opposing China’s new move, it is important to be clear about precisely why it is objectionable, and why it did not have to be so.

An ADIZ is not a provocative or negative step in itself; indeed, it can be in the interests of stability and security of the nation enforcing it. Many countries have such zones already, including Japan, South Korea and the US, which started the whole trend decades ago.

If China’s new zone did not include disputed maritime territory, if its requirements for compliance applied only to aircraft heading into Chinese airspace, and if neighbours like Japan and South Korea had been consulted ahead of the announcement, then there would be little or nothing for others to object to. Indeed, it could have been part of a wider strategy of cooperation to reduce maritime security risks in North Asia. [Source]

One of the most incendiary statements on the ADIZ came earlier this week from PLA Air Force major general Qiao Liang, who according to South China Morning Post warned that “any foreign aircraft disobeying warnings and deemed to be ‘hostile’ could be shot down” in the ADIZ itself. Other military officials have since contradicted this, however. A PLA Navy rear admiral told CCTV that only aircraft crossing into Chinese airspace from the ADIZ might be fired on, while the WSJ article above cites a Defense Ministry spokesman’s statement that “the ADIZ wasn’t a no-fly zone or an extension of China’s airspace [and] it was ‘incorrect’ to suggest China could shoot down planes in the zone.” Japanese airlines and their defiant passengers appear satisfied that the zone is indeed safe. Elsewhere, the Journal’s Jeremy Page quoted further confirmation that no hostile action would be taken in the ADIZ, but noted that the airspace around the disputed Diaoyu Islands is an important exception:

“If the U.S. continues to send its aircraft without following the rules, we’ll send our military planes to escort them, not to repel,” said Shen Dingli, an expert on international relations and Chinese foreign and defense policy at Fudan University in Shanghai.

“China does not under any circumstances have the right to expel any aircraft outside its own airspace,” he said. “But we’ll escort them to show there is a cost. If the U.S. sends one, we’ll send two, and we have 1,000 waiting.”

[…] Adding to the current risks, both China and Japan regard the airspace immediately surrounding the disputed islands as their national airspace and reserve the right to shoot down any unidentified aircraft that enters. [Source]

“Clearly, the visit to China creates an opportunity for the vice-president to discuss with policymakers in Beijing this issue, to convey our concerns directly and to seek clarity regarding the Chinese intentions in making this move at this time,” a senior administration official told a briefing on Biden’s trip to Asia.

[…] “Biden’s visit next week will be critical and could serve as a way to cool things down a bit,” said Jingdong Yuan, an expert in international affairs at the University of Sydney’s Centre for International Security Studies.

Zhou Qi , a senior fellow at the Chinese Academy of Social Sciences’ Institute of American Studies, said the incident had cast a shadow over the bilateral relationship. But she said Biden’s visit might prove to be a godsend for both sides. “We have to wait and see whether they can solve their differences,” Zhou said. [Source]