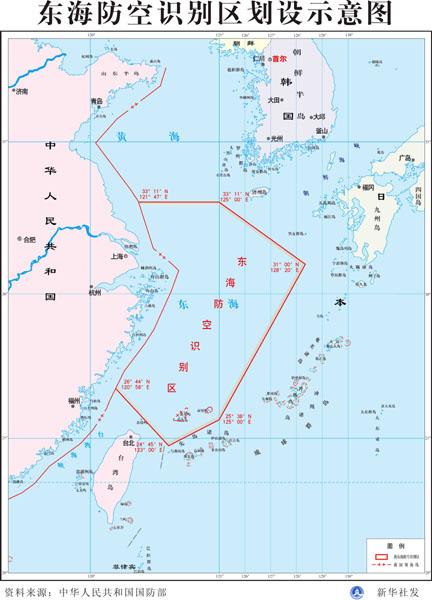 Japan and the U.S. have both voiced displeasure with China’s establishment of an “air defense identification zone” (ADIZ) over the Diaoyu (Senkaku) Islands, whose ownership is disputed by China and Japan. Today, the U.S. demonstrated their disregard of China’s new rules by flying B-52 bombers through the airspace. From AP:

The two unarmed bombers took off from Guam and were in the zone for less than an hour, thundering across the Pacific skies during midday there, the officials said, adding that the aircraft encountered no problems.

While the U.S. insisted the training mission was long-planned and was not in reaction to China’s latest declaration, it came just days after China issued a map and a new set of rules governing the zone, which includes a cluster of islands that are controlled by Japan but also claimed by Beijing.

China said on Saturday that all aircraft entering the new air defense zone must notify Chinese authorities and are subject to emergency military measures if they do not identify themselves or obey Beijing’s orders. U.S. officials, however, said they have received no reaction to the bomber flights from the Chinese. [Source]

B-52 bombers passed through what is likely to become the most contested area of China’s new “air defense identification zone”: the airspace above islands that are the subject of a tense sovereignty dispute between Japan and China.

The flights over the East China Sea came a week before Vice President Joseph R. Biden Jr. is scheduled to visit Beijing as part of a weeklong trip that will include stops in Japan and South Korea amid American attempts to revive its “pivot” to Asia. Administration officials said Mr. Biden would raise American concerns about China’s territorial claims with the leadership in Beijing.

The American officials said the United States military would continue to assert its right to fly through what it regards as international airspace by continuing a standard cycle of training flights in the area. United States officials said there had been no Chinese response to Tuesday’s bomber run, which was a roundtrip from Guam. [Source]

Earlier, the Pentagon had asserted that the new zone would not alter the flying patterns of U.S. aircraft, the Diplomat reports:

In the official Pentagon press release, Hagel went on to say that “This announcement by the People’s Republic of China will not in any way change how the United States conducts military operations in the region.” Japan also said that it would not comply with the rules that Beijing announced it would be enforcing in the airspace covered by the ADIZ, which includes the Senkaku/Diaoyu Islands and overlaps with Japan’s own ADIZ. Tokyo also scrambled fighter jets in response to China’s patrols over the airspace.

China quickly responded to both Japan and the Pentagon’s comments. Toward the latter, Beijing called on the Pentagon to uphold Washington’s promise that it would not take sides on sovereignty disputes, and asked it to “stop making irresponsible comments.” [Source]

See more on the official U.S. reaction, via this tweet from M. Taylor Fravel:

US view of ADIZ, from THE COMMANDER’S HANDBOOK ON THE LAW OF NAVAL OPERATIONS pic.twitter.com/zPbSdMgnF2

See more on the Chinese government’s reaction to U.S. statements on the ADIZ from CNN.

The Japanese government similarly issued a statement that aircraft should ignore the boundaries imposed by China. From the Wall Street Journal:

Japan’s aviation authorities issued an order Tuesday to the national airline association instructing them to disregard a Chinese request for the flight plans of all flights that pass over the area in dispute.

“China’s measures have no validity in our country,” said Chief Cabinet Secretary Yoshihide Suga at a news conference Tuesday evening. “We can’t accept a step that imposes unfair obligations on airplanes that fly in the zone set by China.”

The move shows that Japan is determined to take a tough line in the dispute, which centers on a group of uninhabited islands in the East China Sea that are claimed by both countries but effectively controlled by Japan. China has been trying to assert its authority by sending boats to patrol the waters around the islands. On Saturday, it upped the ante by declaring the airspace around them an air-defense zone, within which foreign aircraft must identify their flight plans and follow instructions from the Chinese military.

China’s civil aviation authority also requested international airlines submit their flight plans for flights passing through the zone, effectively making a broad bid for recognition of its authority over the area. [Source]

After China’s Saturday announcement of its new ADIZ, South Korea said the decision was made without prior consultation and called in a senior Chinese military official in Seoul to express its concern.

While both sides stress that the matter will be handled through dialogue, the issue has cooled ties that had been warming. The bond between China and South Korea has grown stronger as tensions between both countries and Japan over territorial and historical issues have escalated. China-South Korea trade hit $215 billion last year. [Source]

Meanwhile, at home, Sina Weibo users also spoke out about the plan, with many showing support for the Chinese government’s move, according to Tea Leaf Nation. The dispute with Japan over the Diaoyu (Senkaku) Islands had led to public protests in 2012:

On Sina Weibo, China’s Twitter, over 200,000 recent posts mention the air defense map; of those sampled, the vast majority lauded Beijing for defending their sovereignty and territorial integrity. As one user wrote, the map “lets the little Japanese know that our power does not stop at the tip of our tongue.” Another wrote it was time for China to “take Japan to school and teach it how to act.” Netizens seemed aware that the move will probably raise tensions, but they didn’t seem to mind. “The likelihood of conflict from ‘polished guns’ between the two armies has just risen,” Lin Zhibo, a journalist at the Communist Party mouthpiece People’s Daily, wrote, invoking a Chinese term for a serious conflict emerging from a small matter. “This is a danger we must have the courage to shoulder.”

The only complaint most Chinese commenters seemed to have was timing: They wanted this to have happened earlier, as pushback against a neighbor many Chinese feel has “never reckoned” with the history of World War II, when Japan committed atrocities in China. A user called “Silent Majority” wrote, “This is a measure aimed at Japan’s remilitarization,” a process that seems to have begun in earnest following Shinzo Abe’s Dec. 2012 election as Japanese prime minister. If China “waits for others to move before we react,” the user continued, “there won’t be enough time.” Military analyst Yue Gang agreed. “This is the correct direction for China’s strategic preparations,” he wrote on Weibo. “Clenching its fists together to make a breakthrough.” [Source]

Meanwhile, China’s first aircraft carrier took a test run to the South China Sea, the site of another heated territorial dispute with several of its neighbors. From Times of India:

The Liaoning left port from the northern city of Qingdao accompanied by two destroyers and two frigates, the Chinese navy said on an official news website.

While there, it will carry out “scientific research, tests and military drills”, the report said.

“This is the first time since the Liaoning entered service that it has carried out long-term drills on the high seas,” it added.

The timing of the drills is bound to raise eyebrows with its neighbours, given the overlapping maritime disputes. China has lodged formal protests with the United States and Japan after both criticised its plan to impose new rules on airspace over disputed waters in the East China Sea. [Source]

For more, read:
– How to Think About the Chinese Air-Defense News by James Fallows in the Atlantic
– Did China make strategic error with air zone? by Michael Mazza on CNN