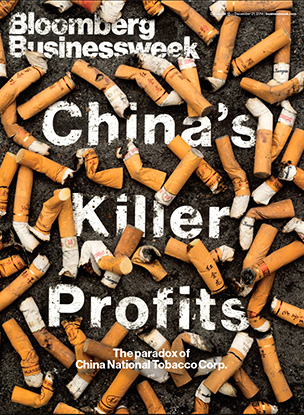 Bloomberg Businessweek’s cover story this week is an in-depth examination of China’s state-owned tobacco monopoly by Andrew Martin. China National produces 2.5 trillion cigarettes a year, and provides 7% of government revenue. In 2012, its own revenue outweighed Apple’s. The government has taken increasingly serious measures to reduce smoking, which kills an estimated one million Chinese a year, but the conflict of interest is evident: “For all practical purposes,” Martin writes, “China National and its regulator are the same entity.”

In terms of [global] market share, China National is bigger than its next five competitors combined; its growing sales have accounted for a net increase in global production, even as volume at its competitors has fallen. While Marlboro remains the most popular cigarette in the world, China National boasts 7 of the top 10 brands, including Red Pagoda Mountain and Double Happiness. In all, the company made 43 out of every 100 cigarettes in the world last year, according to Euromonitor International. Despite its size, China National is little known outside of China: Almost all its cigarettes are sold in the country, where it has no real competition.

A conglomerate on the order of the old Gulf + Western, China National runs more than 160 cigarette brands, manufactured in about 100 factories across the country, and uses its earnings to invest in banks, luxury hotels, a hydroelectric plant, a golf course, and even drugmakers. Most of its money goes to its owner, the Chinese government; the tobacco industry accounts for about 7 percent of the state’s revenue each year, and China National controls as much as 98 percent of the market. All told, the industry in China employs more than 500,000 Chinese. They are among roughly 20 million people who get some income from tobacco, including members of 1.3 million farming households and workers at 5 million retailers, according to government figures. The extent to which the government is interlocked with the fortunes of China National might best be described by the company’s presence in schools. Slogans over the entrances to sponsored elementary schools read, “Genius comes from hard work. Tobacco helps you become talented.” [Source]

Such sponsorship should now be a thing of the past. In January, the Ministry of Health issued a ban on smoking and tobacco advertising in schools, as well as the sale of tobacco products by school canteens.