Cigarettes Kicked Out of School in China 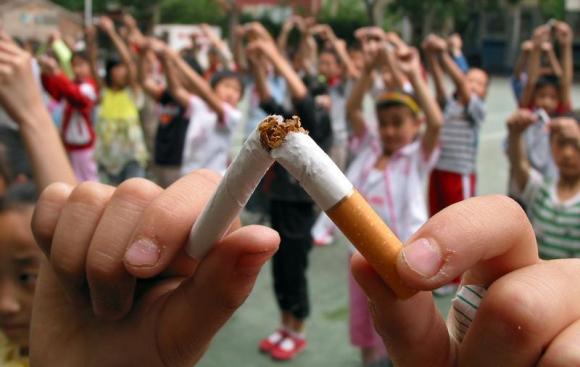 China’s tobacco industry produces 40% of the world’s cigarettes, and the country is home to 25% of the world’s smokers. As China’s tobacco production has nearly doubled over the past decade, the government has in recent years been making efforts to curb smoking: in 2009, China raised the tax on tobacco products, and in 2011 a nationwide ban on smoking in public places went into effect—though enforcement remains weak. Since public health experts warned that China could have more than a million lung cancer patients by 2025 last November, the government has signaled a renewed commitment to fighting tobacco use, and officials are now banned from smoking in public, putting to rest a “decades-old tradition.” In another move to discourage smoking, the Ministry of Education has enacted a new ban. Reuters reports:

China has banned smoking in schools, state media reported on Wednesday, the latest step in a government drive to kick the country’s pervasive tobacco habit.

[…] The latest ban, imposed by the Ministry of Education, covers kindergartens, elementary and middle schools, and vocational schools. Universities must set up smoking areas and forbid lighting up in academic buildings.

Anti-tobacco efforts have been hampered by the country’s powerful tobacco monopoly, health campaigners say, which pays hundreds of billions of yuan in taxes every year.

[…] Schools can no longer seek sponsorship from cigarette brands or post tobacco advertisements on campus, the ministry said in a notice.

Schools that do not crack down properly will be punished, the ministry said. [Source]