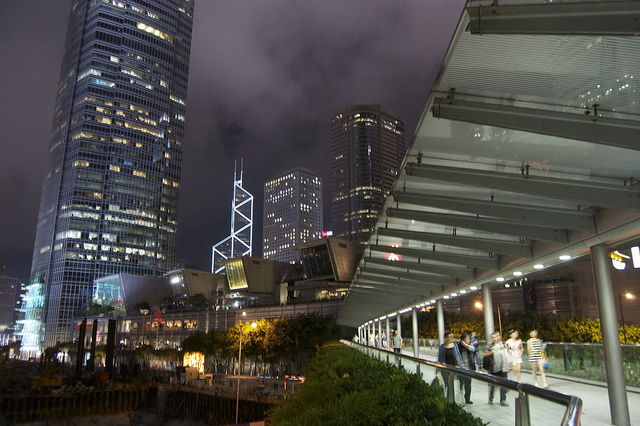 As pro-democracy protests in Hong Kong saw a new wave of violent clashes between police and civilians, tension between China and the UK has also escalated. At the Independent, Oliver Wright and James Legge report on a diplomatic clash between the two countries after Beijing barred a group of British politicians from entering Hong Kong:

[…] The unprecedented move to bar members of the Foreign Affairs Committee from Britain’s former colony was communicated to the chair of the committee, Sir Richard Ottaway, by China’s deputy ambassador.

He tonight accused the Chinese authorities of acting in an “overtly confrontational manner” in threatening to deport them if the group enters the country and described the move as a “very serious matter”. He said he would call on Monday for an emergency debate in Parliament.

[…] The British MPs were due to arrive in Hong Kong later this month to meet with pro-democracy activists as well as the Hong Kong Government. This was part of its investigation into UK’s relations with Hong Kong 30 years after the Joint Declaration was signed that handed the colony back to China.

[…] Mr Ottaway said he first became aware of Chinese concerns about the visit in August when he was called to see the Chinese ambassador to London. “I expected it to be a civil conversation,” he said.

“But it was pretty abrasive and confrontational. He said we were meddling in the internal affairs of another country. He said we should cancel our inquiry and said we wouldn’t be welcome in Hong Kong. [Source]

At the Wall Street Journal, Jenny Gross reports on British authorities’ concerns regarding the entrance bar and the general situation in Hong Kong.

[…] British Prime Minister David Cameron views China’s decision to block the politicians as “a mistaken one,” his spokesman, Jean-Christophe Gray, said. The prime minister believes “it is counterproductive because it only serves to amplify concerns about the situation in Hong Kong, rather than diminishing concerns,” Mr. Gray added.

[…] “It does bring into question whether they remain committed to the one country, two systems principle,” Mr. Ottaway said, referring to the policy that guarantees Hong Kong a high degree of autonomy. “It’s beginning to look like one country, one system.”

[…] Britain’s foreign-affairs committee started its inquiry into the U.K.’s relations with Hong Kong in July, two months before the Hong Kong protests began in September. Mr. Ottaway said the fact that the inquiry had started before the protests undermined China’s argument that the British government is giving support to the protesters. The trip to Hong Kong was planned for the third week in December. [Source]

The BBC reports that committee chairman Sir Richard Ottaway’s request for an emergency debate in the House of Commons has been approved:

Requesting a debate, committee chairman Sir Richard Ottaway said the refusal was an “affront to this House and to men and women of the free world”.

The debate will be held on Tuesday.

Emergency debates are rare in the House of Commons. They can last for three hours and take precedence over all other business.

[…] During his five years at the head of the committee, Sir Richard said it had never been refused entry anywhere because most countries, even those that were not democracies, knew that transparency was vital in the 21st Century. [Source]

Read more updates on the pro-democracy protests in Hong Kong via CDT.