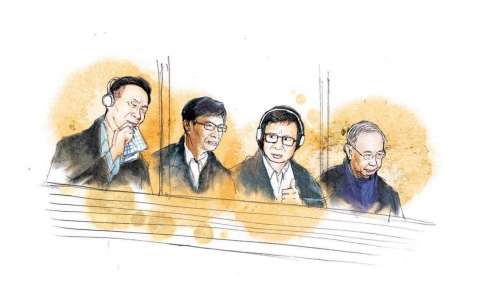 One of Hong Kong’s largest corruption cases to date has concluded with the sentencing of a former top official and a property tycoon. Douglas Wong and Shai Oster report for Bloomberg:

Rafael Hui, 66, the city’s chief secretary from 2005 to 2007, was sentenced to 7 1/2 years for five charges including taking HK$8.5 million from Kwok to be favorably disposed to Sun Hung Kai, the world’s second-most valuable real estate firm. Thomas Chan, a former executive director of the company, was jailed for six years while Francis Kwan got five years.

Hong Kong’s biggest graft trial ended last week with a nine-member jury finding the four men guilty and Kwok stepping down from the company he headed with his younger brother Raymond Kwok since 2011. Raymond was acquitted of all four charges against him and continues as the sole chairman of Sun Hung Kai, which has said the case doesn’t affect its business.

“It is vitally important in these times that the Hong Kong government and business community remain and are seen to remain corruption free,” High Court Judge Andrew Macrae said in delivering his sentences today. “Particularly when the mainland is taking positive steps to eradicate the cancer of corruption.” [Source]

Stuart Lau has more background on the case for the South China Morning Post:

The case came to light in 2008 when ICAC received an anonymous letter accusing Thomas and Raymond Kwok of providing Hui with rent-free accommodation at Leighton Hill.

ICAC arrested and charged the defendants in 2012 with conspiracy to bribe Hui with millions of dollars for him to be “eyes and ears” in government.

The trial started in May this year but was adjourned for nearly a month after the first jury was dismissed.

Hui, was convicted of five out of eight charges, including misconduct in a public office, making him the highest-ranking official in Hong Kong’s history to be convicted of taking bribes.

Thomas Kwok, 63, was convicted of one count of conspiracy to commit misconduct in public office. [Source]

Protesters who recently gathered on Hong Kong streets for two months raised a variety of economic grievances, including wide inequalities that have built up in the society and a culture of “crony-capitalism,” in which wealthy businesspeople are able to benefit from close connections to government officials.