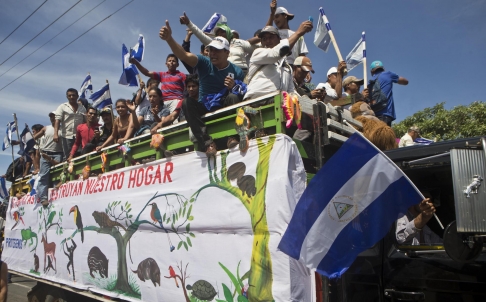 Since a Chinese firm last year won the concession to build, design, and oversee a $40 billion canal in Nicaragua to rival Panama’s, controversy has surrounded the project. While it is expected to juice up the economy of the second poorest nation in the Americas (as a recent English-language Xinhua headline points out), a lack of transparency along with China’s track record of economic influence and environmental impact has critics concerned. Reuters’ Gabriel Stargardter reports on the symbolic groundbreaking of the massive project, which is set to be in operation by 2020:

The groundbreaking was largely symbolic, as work began on a road designed to accommodate machinery needed to build a port for the canal on the Central American country’s Pacific coast.

Nicaragua’s government says the proposed 172-mile (278-km) canal, due to be operational by around 2020, would raise annual economic growth to more than 10 percent.

The canal could also give China a major foothold in Central America, a region long dominated by the United States, which completed the Panama Canal a century ago.

[…] More than a year since it was first announced, the project faces widespread skepticism, with questions still open about who will provide financing, how seriously it will affect Lake Nicaragua and how much land will be expropriated for it. [Source]

At the South China Morning Post, Partick Boehler reports on local protests against the canal over pollution concerns, unfair land compensation, and fears that the project will disproportionately benefit China:

Viva Nicaragua!” they were shouting in videos shared by activists, expressing their fears about land seizures and pollution caused by the infrastructure project led by a Hong Kong-based firm.

Protesters said they had so far only blocked vehicles carrying employees of the HKND Group, the company holding the concession to build and operate the canal. Chinese surveyors have been assaulted, according to Nicaraguan media reports.

“This project will bring no benefit to the people of Nicaragua, it will only benefit the Chinese,” said Danilo Lorio, a 24-year old leading the protests near San Miguelito on the western shore of Lake Nicaragua. “The compensation offer for our lands is ridiculous.” [Source]

While surveying the many causes for concern over the project in a report for the Washington Post, Ishaan Tharoor focuses on the political unease surrounding Wang Jing and his Hong Kong Nicaragua Canal Development Investment Company (HKND):

Ground was broken only after a deal hatched last year between Nicaragua’s Sandinista government and a consortium led by Chinese telecoms billionaire Wang Jing. Critics wonder how the little-known Wang came to win the bid, which gives his Hong Kong-listed company, HKND, a 100-year-long concession over the canal’s operation. There was next to no transparency in the process. Wang is exempt from local taxes and commercial regulations, and has been granted hiring and land-expropriating powers, according to the Guardian.

There are already doubts about Wang’s ability to finance the project, and some speculate that it will never actually be completed, leaving perhaps at best some ports and container facilities but no canal in between.

In an interview with Reuters earlier this year, Wang said he was forking out some $10 million a month of his own money as the project’s preparations grew apace. Wang demurs on whether he will seek aid or loans from China. Many observers see the planned canal as China’s biggest footprint in Latin America. Although it’s not unusual for Chinese state companies to bankroll infrastructure projects around the world, Wang has said the Nicaraguan canal is a fully private venture. He’s walking a geopolitical tightrope: To this day, Nicaragua maintains diplomatic relations with Taiwan, not the government in Beijing. [Source]