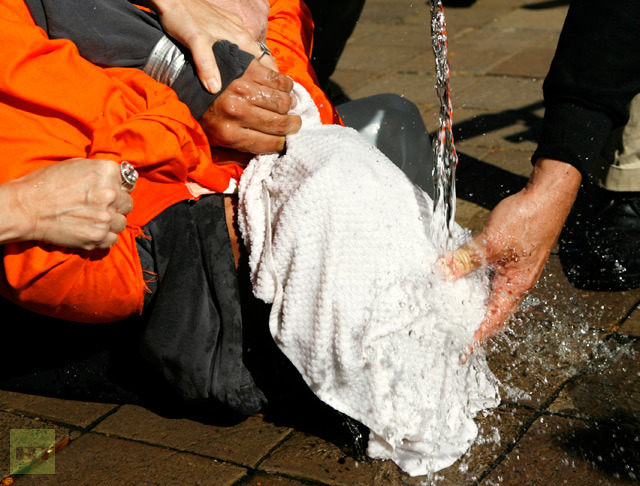 The Senate Intelligence Committee’s executive summary detailing torture methods used in the CIA’s secret interrogation program during the Bush administration’s “War on Terror,” prompted criticism from China’s state media and Foreign Ministry. Official media devoted special attention to the revelations and U.S. “double standards,” while the Foreign Ministry called on Washington to “correct its ways” and stated China’s consistent opposition to torture. Days later, following the posthumous retrial that exonerated Huugjilt, a man executed in Inner Mongolia in 1996 for rape and murder, Chinese state media admitted that the use of torture to force prisoner confessions “has not been rare.” The Washington Post’s Simon Denyer reports, and translates netizen commentary:

“It has not been rare for higher authorities to exert pressure on local public security departments and judiciary to crack serious murder cases,” the state-run China Daily said in an editorial. “Nor has it been rare for the police to extort confessions through torture. And suspects have been sentenced without solid evidence except for extorted confessions.”

[…] In an editorial released after last week’s report into interrogation by the CIA, Xinhua accused the United States of “sheer hypocrisy” in casting itself as a defender of human rights. The news agency asked whether the report would accelerate the United States’ fall “from the altar of morality and justice.”

Some bloggers and other Netizens here appeared to share their government’s outrage. But most reacted with irony to that report last week, suggesting U.S. interrogators might have learned a trick or two from China. One posted an imaginary conversation between the CIA and a suspect: “CIA: If you don’t confess, I’ll send you to China. Criminal: I confess!” […]

“I see that China Central Television is talking about torture in the United States every day. Waterboarding, sleep deprivation, and that’s torture. These are the most lightweight in China!” posted another. [Source]

According to the Senate Intelligence Committee report, the two architects of the CIA’s “enhanced interrogation techniques” had been paid $81 million for “work [that] consisted of “reverse-engineering” survival techniques taught to US military personnel to withstand Chinese and North Korean torture techniques if captured during the Korean War,” (via The Guardian).

Beijing and Washington engage in an annual critique of each others’ human rights records.

Earlier this year, a survey from Amnesty International found that 74% of the Chinese public supported the proposition “torture is sometimes necessary and acceptable to gain information that may protect the public,” compared to 36% worldwide.