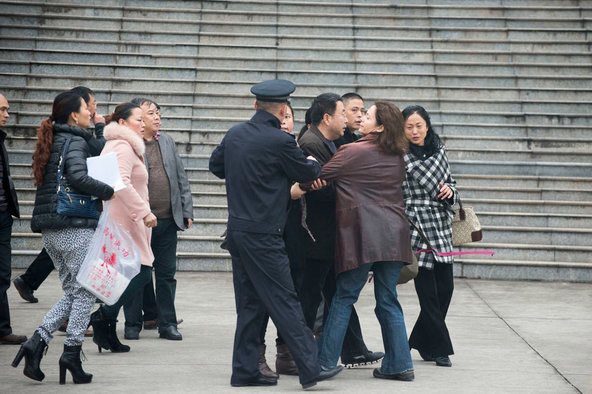 Xinhua reports the retrial in Inner Mongolia of a man executed nearly twenty years ago:

The presiding judge with Inner Mongolia Higher People’s Court, Bobatu, issued a retrial notice to the parents of Huugjilt, found guilty of the rape and murder of a woman in a public toilet in the regional capital Hohhot on April 9, 1996.

Huugjilt, 18 at the time, was sentenced to death by Hohhot Intermediate People’s Court in May 1996. His appeal was rejected, the death penalty was approved by the region’s higher court and Huugjilt was executed on June 10,1996.

After his execution, another alleged serial rapist and killer, Zhao Zhihong, confessed to the murder when he was arrested in 2005. Zhao allegedly raped and killed 10 women and girls between 1996 and 2005. He stood trial in late 2006 and no verdict has yet been issued.

President of the higher court, Hu Yifeng, said earlier this month that should there be any errors in the previous ruling, they must be addressed. [Source]

Huugjilt reportedly confessed to police, but later maintained his innocence, suggesting that his initial statement may have been coerced. The problem of forced confessions was recently addressed by China’s top prosecutor following a string of high-profile acquittals, and exclusion of illegally obtained evidence is one focus of the mandatory death sentence reviews conducted since 2007 by the Supreme People’s Court. The Dui Hua Foundation described the review process in detail this week:

Sometimes, review of the case files uncovers very basic errors that could have an impact either on conviction or sentencing. In many instances, additional details or investigation will be required, and sometimes the SPC judge handling the case will have to go personally to the provinces to conduct investigations. According to one SPC official, additional investigation was required in 39 percent of the cases sent to the SPC for review in 2013.

[…] As they review death penalty cases, judges pay particular attention to issues of evidence and penal policy. In recent years, the SPC has introduced and refined measures for excluding evidence that has been obtained illegally, and the court’s stricter line on evidence is one of the reasons why China’s highest court rejects roughly 10 percent of death penalty cases each year.

The impact of penal policy is much more fluid and hard to predict. Over time, the court has settled on a number of general principles designed to reduce use of the death penalty. For example, in cases involving the death of a single victim the death penalty is typically waived if the defendant surrenders or if the case involves a dispute among family members or neighbors. But putting these more lenient policies into effect often requires overcoming resistance from a victim’s family members. […]

[…] As the Supreme People’s Court Monitor blog recently pointed out, one potentially groundbreaking reform being considered would ensure that all defendants in death penalty cases are represented by a lawyer during the death penalty review process. […] Ensuring that all defendants in cases involving capital punishment have legal representation throughout the criminal process, regardless of economic means, would be another important step toward strengthening rights protections in the criminal process in China. [Source]

Regarding the issue of victims’ families, Dui Hua cites the case of Li Yan, who killed her abusive husband Tan Yong in 2010. Amnesty International reported last year that “Tan inflicted frequent beatings on his wife. He cut off one of her fingers, stubbed cigarettes out on her face and during the freezing Sichuan winters locked her outside on the balcony of their apartment for several hours with little clothing.” The Supreme People’s Court later overturned Li’s death sentence and ordered a retrial, which took place in Sichuan this week. From Didi Kirsten Tatlow at The New York Times:

The Tans — a large family from nearby Anyue County where Ms. Li, a former silk factory worker, and Mr. Tan, a former driver, ran a noodle stall — wanted Ms. Li dead. “A life for a life” read the banners held by the relatives and supporters of the family outside the courtroom.

[…] Periodically, the Tans howled insults at Ms. Li’s two female defense lawyers: “You should be raped 500 times!” No one was thrown out for contempt of court. Ms. Li’s relatives sat quietly in a far corner at the back.

Everyone in China wants a better legal system, and the government has promised to provide it. But after decades of corruption, abuse of due process and politically motivated trials, respect for the law — for all authority, in fact — runs low. Pressure from a mob can swing decisions, with the authorities fearing social stability “incidents” that will reflect badly on them with their superiors.

The next day, in Chengdu, Wan Miaoyan, one of Ms. Li’s lawyers, said, smiling wryly: “You see from this the difficulties that China faces.” [Source]

A new verdict and sentence will be announced “at an unspecified time.” China recently announced likely reductions in the scope of the death penalty, but it seems set to remain in place for corruption and violent crimes. The country remains by far the world’s most prolific practitioner of capital punishment despite an estimated 80% drop in executions since 2002.