73% Back Death Penalty for Corruption 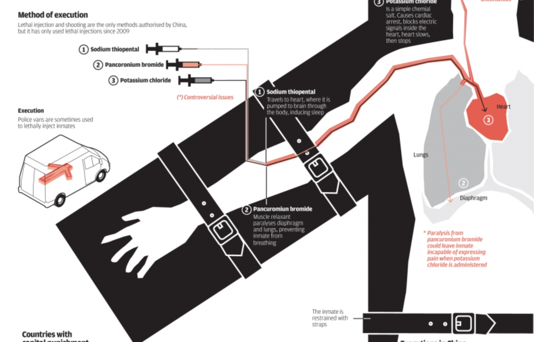 The recent announcement of further proposed reductions in the scope of the death penalty was greeted by Chinese media as in line with a “social consensus” in favor of gradually phasing it out. Reservations about at least some executions appear to have been growing among both the public and the legal establishment. But for some crimes, support for capital punishment seems robust. China Daily reports on a recent survey which found that 73% back execution for corruption:

It is natural that China would remove death penalty after the country joins related international organizations, the report quoted Che Hao, associate professor at Peking University Law School, as saying.

The crimes that no more carry the death sentence are mainly economic and nonviolent in nature. “But the abolishment of death penalty is not only a legal issue but also a political case,” Che said.

Considering the ongoing anti-graft campaign and people’s high expectations, it would be prudent to keep the death sentence for corruption cases, he added. [Source]

A South China Morning Post editorial on Monday commented that although “China’s progress in reducing the use of the death penalty […] shows all the urgency of a funeral march,” “small steps are nonetheless welcome.”

Those removed include illegal fundraising, forcing a person to engage in prostitution, counterfeiting currencies, weapons and nuclear materials smuggling, and obstructing soldiers performing their duty. The removal of such non-violent crimes is more of a symbolic step, but it is to be welcomed because it brings the country closer to international standards and boosts hopes that a long-term decline in the use of capital punishment will continue.

[…] Leaving aside arguments about crime and punishment and the deterrent effect of the death penalty, there are good reasons for China to reflect on it at a time when its leaders have approved reforms to strengthen the rule of law. One is that the liberal use of it raises the possibility of executing prisoners wrongfully convicted by courts that rarely find anyone innocent. It is far from unheard of on the mainland for others to later confess to the crime or for a supposed murder victim to be later found alive. Another reason is the link to non-consensual harvesting of organs for transplant, which does nothing for China’s modern image. [Source]

China remains by far the world’s most active executioner despite a steep and sustained decline. See also a SCMP infographic on capital punishment in China and around the world and more on China’s corruption crackdown and its strengthening of “Socialist rule of law,” via CDT. Another area in which the death penalty seems well entrenched is violent crime, particularly terrorism. A Yunnan court last week upheld the death sentences of three men convicted of involvement in March’s deadly Kunming attack.