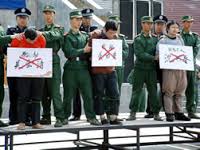 In the New York Times, Mara Hvistendahl writes an opinion piece about changing attitudes toward the death penalty in China, which has long been the world’s leading executioner. In recent years, the rate of executions, while still high, has dropped dramatically:

How does a country that harvests and allegedly sells the organs of executed prisoners begin to lean toward more humane alternatives to the death penalty?

[…] Today, executions in China more often stoke anger than quell it. A 2007-2008 survey of nearly 4,500 people in three provinces funded by the European Commission found that only 58 percent supported the death penalty — compared with nearly 60 percent in the United States. Perhaps most revealing, respondents to the survey were aware of the death penalty’s uneven implementation. Sixty-nine percent believed, accurately, that poor offenders were more likely to be put to death than wealthy ones, while 60 percent thought that innocent people might be wrongfully convicted. Indeed, the Chinese press has been trumpeting wrongful convictions — such as that of a Henan Province man convicted of murder whose supposed victim turned up alive in 2010.

Other surveys suggest that support for the death penalty is higher among Chinese legal and political elites than the general public. Still, these groups have heeded calls from the people for change. [Source]

Read more about the death penalty in China, via CDT.