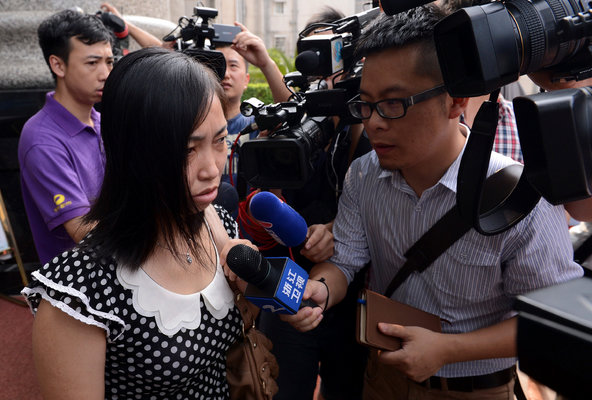 The AP reports that China’s National People’s Congress is likely to roll back the country’s death penalty, abolishing it for nine of the remaining 55 capital crimes.

The crimes include illegal fund raising, counterfeiting, smuggling counterfeit currency, organizing prostitution, forcing others to engage in prostitution, and smuggling weapons, ammunition and nuclear materials. They also include two military-related crimes — obstructing others from performing military duties and fabricating rumors to confuse the public during war time.

China currently has 55 crimes that are punishable by death, including murder, burglary, rape and drug-related offenses. Some economic crimes, such as embezzlement and taking bribes, are also punishable by death, although Chinese courts rarely hand out capital punishment for them.

[…] China has been gradually reducing the number of crimes punishable by death. In 2011, it dropped the death penalty for 13 crimes such as smuggling precious metals, teaching others criminal methods, and illegally excavating ancient tombs. [Source]

As well as reining in the number of capital crimes, China began in 2007 to refer all death sentences to the Supreme People’s Court for review. This has led to high-profile acquittals such as that of Nian Bin in August, seven years after his initial conviction for murder triggered a series of three appeals and three retrials. The new batch of imminently decapitalized crimes have been at the center of at least two other such cases in recent years. Zhejiang business tycoon Wu Ying was sentenced to death in 2009 for illegal fundraising, but was resentenced after review to a suspended death sentence in 2012. This was commuted this summer, as is routine, to life imprisonment. Also this year, two death sentences were overturned in the notorious case of an eleven-year-old girl who was kidnapped, raped, and forced into prostitution in Hunan in 2006. The girl’s mother Tang Hui gained widespread public support after being detained while petitioning for all seven of those involved to be executed.

Although a foreign ministry spokesman defended execution as an expression of traditional Chinese culture in March, its use has declined as reservations grow among the public and legal establishment. The Dui Hua Foundation reported last week that the drop has been both steep and sustained, down an estimated 80% since 2002 and 90% from a peak in 1983, though China remains by far the world’s most active executioner. This year, a burst of executions under China’s anti-corruption and anti-terrorism campaigns is likely to stall the trend. Xinhua’s report on the imminent changes promised that punishments in these areas, along with several others, would not soften:

The draft amendment did not remove capital punishment for corruption crimes. Instead, lawmakers are considering imposing harsher punishment on those committing crimes of embezzlement and bribery.

Those involved in such crimes with “especially huge amounts of money and causing especially huge loss to the interest of the country and people” could be sentenced to death, according to the draft amendment.

[…] Those promoting terrorism and extremism by producing and distributing related materials, releasing information, instructing in person or through audio, video or information networks will face more than five years in prison in serious cases. Those who instigate violent terror activities will also face the same punishment, according to the draft amendment.

Those who instigate or force people to damage legal systems including marriage, justice, education and social management will be sentenced to more than seven years in prison in extremely serious cases, according to the draft.

[…] Organizing cheating in examinations and bringing civil litigations based on fabricated facts to pursue illegitimate interests are also listed as crimes that are punishable to imprisonment up to seven years and three years respectively. [Source]