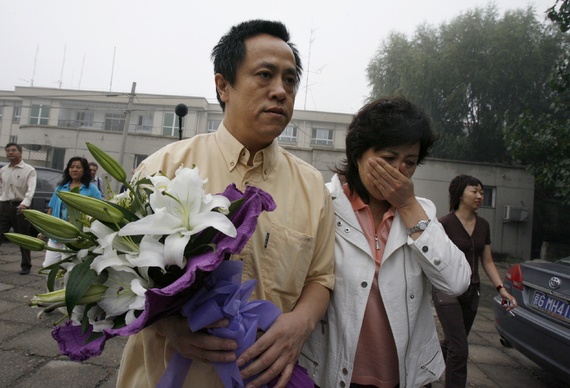 At The Atlantic, Matt Schiavenza describes the valuable work of foreign media organizations’ Chinese news assistants and the elevated risks they face, in the wake of German reporter Angela Köckritz’s account of her own assistant Zhang Miao’s detention last year:

[…] Written from exile, it reads like a tense thriller, revealing the ruthlessness of China’s internal security apparatus. But the article has also directed new attention to the unseen but vital work of China’s news assistants, men and women tasked with helping the country’s foreign correspondents do their job. Chinese citizens cannot legally report from China for foreign news sources, and those acknowledged as contributing to articles often use an assumed name. But they are indispensable to their foreign colleagues. They arrange interviews, conduct research, handle logistics, interpret, and translate. News assistants also act as a cultural liaison for foreign colleagues who may speak no Mandarin or know little about the country.

[…] News assistants face risks that far exceed those of their foreign colleagues. State security officials, who monitor foreign news coverage closely, frequently invite news assistants “for tea,” a common Chinese euphemism for unwelcome encounters with government authorities. In these meetings, news assistants are asked to divulge what foreign journalists are working on, the names of their sources, and other information vital to their work. Those who refuse to comply risk harassment, beatings, and indefinite detention. [Source]

Schiavenza highlights a 2011 post on the Committee to Protect Journalists blog in which an anonymous news assistant describes the job. Five current and former news assistants discussed their work and Zhang’s case with Eric Fish at Asia Society (via CDT) last week.

In a Deutsche Welle article translated at China Change, media commentator Chang Ping comments on a Public Security official’s statement that “Zhang Miao is a completely normal Chinese citizen. And we will treat her like we deal with Chinese citizens.”

If you are a Chinese citizen, you can be disappeared without even a plausible charge. In the aforementioned briefing, Foreign Ministry spokesman said Zhang Miao was detained for “allegedly provoking disturbances,” but Köckritz said in her article that she was at first told that Zhang Miao was “involved in a village squabble,” and then, she was told that Zhang Miao’s case is “about the security of the state, about its territorial integrity,” and “about inciting unrest.” The judiciary procedure prescribed by the Criminal Procedure Law of PRC is supposed to regulate how police go about making charges. But the police told her that “the Criminal Procedure Law doesn’t apply.”

Ten years ago, Chinese news assistant Zhao Yan (赵岩) working for the Beijing Bureau of the New York Times was arrested on charges of leaking state secrets. Seven months later, the charges morphed into fraud. Then, shortly before Hu Jintao’s visit to the United States, the prosecutors dropped all charges against Zhao Yan. Two months later, the same prosecutorate indicted Zhao Yan again on fraud charges, and he was sentenced to three years in prison. Currently, both lawyer Pu Zhiqiang and scholar Guo Yushan were detained on one charge and then officially arrested on another. One may conclude that it is the Chinese government that is really committing fraud. [Source]

According to Chinese Human Rights Defenders, Zhang is one of 112 mainland Chinese detained and 23 formally arrested for supporting last year’s protests for universal suffrage in Hong Kong. Last week, CHRD described the alleged mistreatment of two others, lawyer Song Ze and activist Xu Chongyang, who were also arrested for “creating a disturbance”:

Song Ze told lawyer Li that other inmates have physically abused him, apparently on the order of guards. When Song tried to defend himself during an assault on January 2, guards punished him by tightly shackling his legs, while the inmate who assaulted him was not disciplined. Guards also barred Song, whose eyesight is severely impaired, from wearing his eyeglasses, which he depends on for daily functions. When his lawyer protested, guards cited regulations banning detainees from wearing glasses, but were unable to produce a document regarding such a rule.

Xu told his lawyer that since his detention began, police have tortured him to force him to confess. During his first month of detention, police subjected him to daily interrogations lasting as long as 20 hours. Xu also was beaten in the detention center corridors and bathrooms, slapped in the face, and kicked in the genitalia. Xu was actually taken into custody in October just as he was filing a complaint to authorities about torture he suffered during a past detention. [Source]