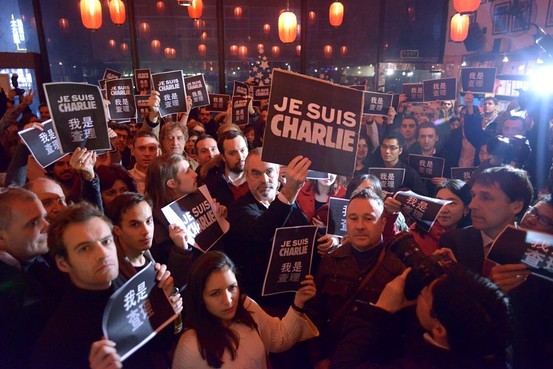 Plainclothes and uniformed police were present at a gathering of foreign correspondents in Beijing who came together on Thursday to show support for Charlie Hebdo, the French satirical magazine whose Paris headquarters was attacked by masked gunmen in a rampage that left 12 people dead. Mark Magnier at China Real Time reports:

FCCC President Peter Ford said he saw approximately a half dozen apparent plain clothes policemen in the crowd of over 100 foreign and Chinese reporters, including one who videotaped everyone in attendance. At least two uniformed police were also visible in the packed main room of the Bookworm and at the building’s entrance. The manager of the bookstore and café could not be reached.

[…] “I assume the authorities were nervous about something they might have perceived as pro-freedom of speech in a gathering that could’ve had implications for China,” Mr. Ford said. “But the purpose of the meeting was exclusively to express our sympathy for the families of the victims and others, support for the organization and our outrage at the murder of people whose opinion the attackers disagreed with.”

Photos of club members holding blue and white “I am Charlie” signs in French and Chinese were distributed on Twitter, Facebook and in an email to members.

Scrutiny of Thursday’s event, attended by China Real Time, comes amid heightened anxiety in Beijing over the influence of Western political ideas.  China in recent months has jailed or detained dozens of rights activists and lawyers, launched probes into the activities of foreign nonprofits and issued warnings through state media about the risk of “foreign forces” destabilizing the nation. [Source]

Also see CDT’s collection of illustrated responses to the January 7 attack in Paris from Chinese cartoonists.