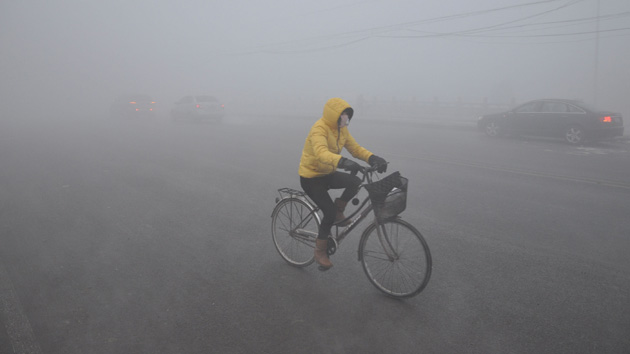 This winter, like years past, has seen Beijing and other Chinese cities blanketed in a thick cover of smog. Last week, the Air Quality Index went above 500, the highest level on the AQI chart:

Pollution so bad here yesterday morning that I got off at the wrong bus stop because I couldn't see where I was. #China #airpocalypse

@mgerrydoyle you couldn't see all the way to the end of the joke.

Meanwhile, Greenpeace issued a report which showed that, while air pollution levels were slightly down from last year, many Chinese cities recorded levels of particulate matter that were well above the country’s standards. From AFP:

Levels of PM2.5 — airborne particulates with a diameter small enough to deeply penetrate the lungs — fell year-on-year in 71 of the 74 cities monitored by the ministry of environmental protection, the figures showed.

China’s own standard is 35 micrograms per cubic metre over a year.

The statistics released by Greenpeace were based on official data from China’s ministry of environmental protection. [Source]

James West at Mother Jones’ Climate Watch has more on the Greenpeace report:

New rankings released today by Greenpeace reveal that 90 percent of Chinese cities that report their air pollution levels are failing to meet China’s own national standards—the latest indication of the monumental challenges facing the Chinese government in cleaning up the air breathed by tens of millions of people. It’s a worry that has become a political thorn in the side of the Communist Party, intent on maintaining its power in the face of growing public restlessness over environmental degradation.

Life spans in China’s north, where coal plants are ubiquitous, are thought to be five years shorter than those in the south.

The analysis comes at a time when large swaths of the country suffer under thick layers of toxic smog—usually worse in winter, as demand for central heating increases coal-fired power production. The smog persists despite the government’s self-declared “war on pollution” in 2014, which includes measures to curtail coal use in big cities like Beijing, and limit heavy industries. [Source]

The South China Morning Post took data provided by the Ministry of Environmental Protection (MEP) to create an interactive map showing AQI levels and primary pollutants for every day of 2014.

Greenpeace also interviewed Jia about the film and his experiences with air pollution in China:

Other artists have also gotten inspiration from the polluted air. Li Chunyuan, a former environmental protection official, has written a mystery novel in which the smog plays a lead role. From Reuters:

“Smog Is Coming”, published last June, touches on fraud and bureaucracy and their impact on air pollution, with the official China Daily reporting that online excerpts have received tens of millions of pageviews.

Author Li Chunyuan’s career inspired the fictional effort, which draws characters and scenes from his work as deputy director of the Environmental Protection Bureau in the smog-choked city of Langfang in Hebei province, he told state media.

“It is easier to tell people something through a novel than through boring lectures,” Li told the China Daily.

The novel features a masked burglar who exploits nightly haze to cover his break-ins as it clouds the lenses of security cameras, an episode Li said he took from real life. [Source]

Read more about air pollution and Jia Zhangke, via CDT.