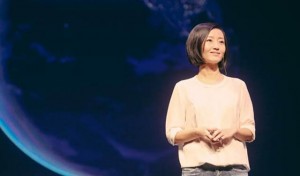 Screenshot from Chai’s 2015 film “Under the Dome,” which exposed the source and effects of smog. (Source: Under the Dome)

Chai Jing is the impassioned journalist known for her viral self-funded documentary on air pollution, “Under the Dome.” Co-released online in February 2015 by Youku and People’s Daily Online, “Under the Dome” was viewed 200 million times before being censored.

Chai launched her career in broadcast journalism when she was still in college, joining Hunan Fine Arts Radio (湖南文艺广播电台) as a host in the mid-1990s. She moved to CCTV in 2001, where she earned her chops covering the SARS outbreak in 2003 and the Sichuan earthquake in 2008. She also started reporting on the environment, earning the 2007 “Green China Person of the Year” award for her special “Shanxi: Desperate to Curb Pollution” (山西：断臂治污).

Chai blogged and engaged with netizens online, who admired her liberal views and outspokenness:

Why must authoritarian [regimes] necessarily fall? That’s because authoritarian system[s] do not have the capacity to housekeep themselves, and the wicked will not withdraw of their own will. Authoritarian systems can only become more and more sordid, more and more bloated. Democracy, on the other hand, is a political form that does have the capacity to clean its own house and to root out the wicked. And so [democracy] can continue to develop. [Source]

Chai left CCTV in 2013 and soon after gave birth to her daughter. Photos of Chai with her baby at an airport emerged in February 2014, along with reports that she had given birth in the U.S. Some netizens called her a “traitor,” though others felt they could not blame her for “voting with her feet.”

Chai resurfaced in 2015 with “Under the Dome,” her gripping, TED-like exposé on the smog that suffocates much of China every winter. Chai interwove the story of her pregnancy and her daughter’s first days breathing Beijing’s dirty air with a scientific explanation of pollution’s effects on the human body, interviews with officials, and her signature hard-hitting reporting. Chai identified the wide usage of fossil fuels and the lack of government oversight as the primary reasons behind the heavy smog, calling for government action in regulating polluters and improving air quality.

“Under the Dome” went viral and sparked online discussion. The film was viewed 200 million times in the short days that it remained on Chinese video streaming sites. But backing from the state newspaper People’s Daily was not enough to save “Under the Dome” from censorship. A propaganda directive leaked days after the film’s release told the media to stop promoting “Under the Dome.” Soon, the video was ordered to be deleted from Chinese websites.

The documentary had been released on the eve of the People’s Political Consultative Conference and the National People’s Congress, dooming Chai’s urgent message lest it surpass the events in Beijing. Despite the censorship of Chai’s film and its coverage, netizens honored the journalist by coining the phrase Chai Jing blue to describe the capital’s cerulean sky amid the political meetings.