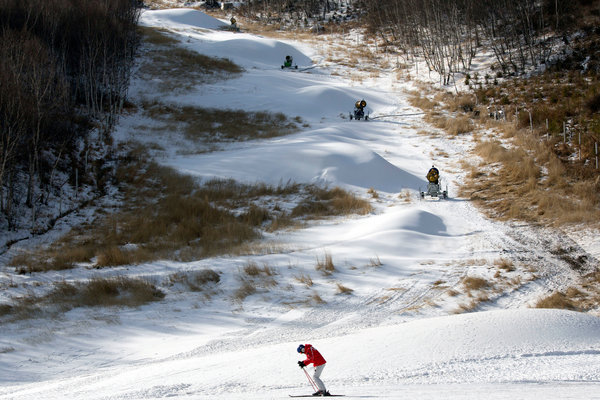 Beijing is vying to become the only city to host both the Summer and Winter Olympics with its bid for the 2022 Winter Games. With other contenders pulling out of the race, Beijing’s only competition is Almaty, Kazakhstan, which is making it a complicated choice for the International Olympic Committee. Not only is China proposing holding alpine ski competitions in Yanqing, which gets an average of two inches of snow a year, but the IOC has pledged to take human rights and environmental concerns into consideration in judging bids, following the 2014 Games in Sochi, Russia. Dan Levin at the New York Times reports:

Desperate to make the Games more palatable to countries traumatized by a reported $51 billion price tag of the 2014 Winter Olympics in Sochi, Russia — and appalled by video from Sochi of uniformed Cossacks beating unarmed female protesters with horsewhips — the committee rushed to pass wide-ranging rules changes in December. These included a more affordable bidding and hosting process, the addition of sexual orientation to the Olympic Charter’s nondiscrimination clause, and a contract that host countries must sign that requires protections for the environment, labor and human rights.

“The Olympic movement is in a once-in-a-generation crisis,” said Minky Worden, director of global initiatives at Human Rights Watch, which documented abuse of dissidents and migrant laborers in China and Russia before and during their Olympic Games. “I believe the I.O.C. reforms are a direct response to China and Kazakhstan. It’s just too big of a black eye.”

[..C]leaning up the environment has proved far more challenging than building stadiums. According to China’s Ministry of Environmental Protection, nearly 90 percent the country’s 74 major cities, including Beijing, failed to meet air quality standards last year. While the government took extreme measures to clear skies during the 2008 Olympics, shutting down factories and limiting the number of cars on the roads, the smog problem has only grown worse.

Last month, Mayor Wang Anshun of Beijing, the bid committee’s president, acknowledged that China’s notorious air pollution had made the city “unlivable.” Still, he has promised that a raft of utopian benefits would come with hosting the Winter Olympics. “The transportation will be more convenient, the sky will be bluer and life will be better,” Mr. Wang said, according to a recent article by the official news agency Xinhua. [Source]

Vice Premier Liu Yandong said on Sunday that the 20220 Games would provide, “a springboard for hundreds of millions of Chinese to join in sports on ice and snow.”

Read CDT’s coverage of the 2008 Summer Olympic Games in Beijing.