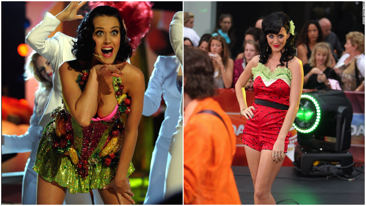 CDT has extensively documented the vibrant wordplay used to evade China’s online censors. But as Wilfred Chan explains at CNN, the creation of colorful nicknames is not reserved for politically sensitive figures such as Hu “The Tire” Jintao, Wen “Teletubby” Jiabao, and Zhou “Instant Noodles” Yongkang.

Sounds mysterious, but you already know who she is. “Fruit Sister,” or “shui guo jie,” is what people in China call Katy Perry – referring to her tendency to wear fruit costumes and bring giant fruit with her on stage.

In the past, the pop star has performed in sparkly watermelon-cup bras, sung while holding a large inflatable strawberry and even burst out of a giant banana.

[…] But “Fruit Sister” isn’t the only Western celeb to get an interesting Chinese alias. Here are a few others and the stories behind them: [Source]