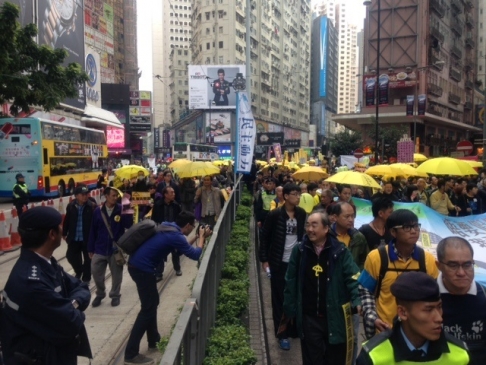 Almost two months after bailiffs cleared out the last of the protesters from Hong Kong streets, following 11 weeks of protests, the first pro-democracy march of the year was held in the Central district. Turn-out at the march — organized by Civil Human Rights Front, a coalition of advocacy group — was lower than expected and subdued. From the South China Morning Post:

[…] “This [turnout] only shows that Hongkongers are no longer satisfied with conventional ways of protest,” [Civil Human Rights Front convenor Daisy] Chan [Sin-ying] said. “If people are tired of marches, it’s not the front which is in trouble but the government.”

Chinese University political scientist Ivan Choy Chi-keung also said the turnout could be a sign the protest was “too moderate” for supporters fired up by the 79-day Occupy street blockades.

“They may also need more time to rest [after Occupy] … or do not feel the urgency to take to the streets again,” Choy said. [Source]

But the march was a tentative test of how much support the pro-democracy groups could muster in the new year for their campaign to force the government into accepting open elections for the city’s top official.

“We want to sustain the momentum after the Occupy protests,” Joshua Wong, an 18-year-old student leader at the forefront of last fall’s street demonstrations, said while walking toward the financial district of Hong Kong.

Hundreds of police officers watched Sunday as the crowd walked through streets crammed with weekend shoppers. But there were no signs of confrontation with the protesters, many of whom held yellow umbrellas, a symbol of the street occupation last year.

For both the protest organizers and the police, the demonstrators’ return to the streets presented a delicate challenge. Though many Hong Kong residents support general demands for unfettered democracy, growing numbers had grown tired of the street occupations by the time they ended in December. [Source]

Violet Law at the Los Angeles Times reports on how march organizers are planning to continue the momentum from the fall:

Whereas large throngs of university and high school students energized the autumn protests, the latest demonstration attracted a noticeably older crowd. Among the marchers were new coalitions, such as the Progressive Lawyers Group and Umbrella Parents, whose members said they believed it was time to take a proactive role in what so far has been a predominantly student-led movement.

The event felt less like a pep rally and more like a strategy session for those most determined to carry on their fight.

“The most important mission upon us right now is: How can we win over the other half of Hong Kong?” said Alan Leong, a legislator in the so-called pan-democratic camp of the territory’s Legislative Council. [Source]

Read more about the 2014 protest movement in Hong Kong, via CDT.