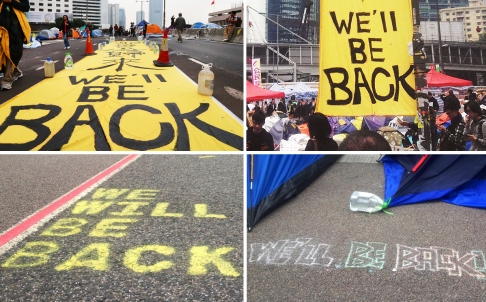 Update (11:30 am PST, Thursday): While the clearance of the Admiralty protest sites was largely carried out peacefully, several holdouts were detained, including several of Hong Kong’s most prominent democracy supporters. James Pomfret and Clare Baldwin of Reuters report:

Groups of up to four police arrested holdout protesters one by one, hours after workers used wire cutters to remove barricades and dismantle bamboo scaffolding.

Martin Lee, one of the founders of the main opposition Democratic Party, student leader Nathan Law, media mogul Jimmy Lai and legislators were among those arrested.

Lai said 75 days of protests would never have been enough to see the demands met.

“We are not so naive,” he told CNN before he was arrested. “We know there will be many battles before we win the war.” [Source]

For more on the clearance, please see the South China Morning Post’s liveblog from Thursday.

Original Post:
Government bailiffs and police descended on the Admiralty neighborhood of Hong Kong to clear out remaining protesters who had stayed despite government orders to end the street demonstrations, which have lasted 75 days. Authorities announced that they would clear out any remaining encampments by 11 am on Thursday, December 11, though the actual action was still ongoing several hours later. Chris Buckley and Keith Bradsher report for the New York Times:

After a night when thousands gathered to give a defiant and tearful farewell to the pro-democracy camp in the Admiralty neighborhood, next to the city government offices, many of the protesters busied themselves packing tents and other equipment before the police were to start clearing them out.

Some protesters vowed to stay and accept arrest, as a show of resistance to the government, which has refused to offer concessions on how the city’s leader is elected. But most who stayed overnight in Admiralty, for nightlong celebrations and farewells, appeared resigned to retreating.

“We’ve been here for two months, more than two months, and it’s time to move on,” said Koby Chan, a sales representative in his 20s who was among a group of protesters packing to leave the area that the police have said would be cleared first, in enforcement of a court injunction. “We’ll stop now, but that doesn’t mean we’re giving up. We’ll be back for sure.” [Source]

A diverse group of protesters joined together in recent weeks, sometimes with differing views of what direction the movement should take. In the New Yorker, Elaine Yu interviews members of an anarchist collective who have been protesting in Hong Kong since 2011 and who joined again in recent weeks:

The anarchists shared some of the protesters’ visions, like land justice and welfare overhaul, but not their desire to seek change through established channels. They were unenthusiastic about calls for democracy and electoral reform when Hong Kong’s capitalist system, which they describe as toxic, would remain. These divisions led to tensions, at times, with the more combative and doctrinaire activists in Mong Kok, who tended to regard the anarchists as lacking in zeal. At one point, the anarchists rolled out a ping-pong table and prepared a hot-pot dinner in the streets, inviting other protesters to share the meal. One of the anarchists, a vocalist named Leung Wing-lai, who goes by Ah Lai, told me that the dinner was intended to challenge the authorities by bringing an element of everyday life into the occupied streets, thereby signalling that “this is how we’re going to carry on.” But some protesters were critical of the idea, and the dinner quickly attracted a hostile crowd, led by a group of self-described “radicals,” many of whom belong to a nativist clique that had been one of the more aggressive forces at Mong Kok. They accused the anarchists of trivializing the struggle and turning it into a carnival, and went so far as to distribute a poster that labelled Ah Lai a Chinese Communist Party informant.

“It feels like the ‘proper’ thing to do is to conduct yourself with a certain amount of gravity: you can’t have fun, because people are getting tear-gassed,” Chan said. “But this is our life…. It’s not peripheral to what we believe in.” [Source]

While packing up, many participants told reporters that they would find other channels to carry on the protest. For China Real Time, Mia Lamar, Fiona Law, and Isabella Stenger report that the students who are packing up have developed a newfound political awareness over the past ten weeks that they will bring with them:

“The biggest success of the protests is that people are awakened,” said Alex Chow, the 24-year-old head of the university student group that led the protests. “The young generation will be the engine of reform.”

[…] Before the protests began, “I probably couldn’t even tell you who the leader of China was,” said 18-year old Steven Au, who is studying to become an accountant. “I’m no longer apathetic. Now I want to protect my home.”

Young people across Hong Kong shrugged off their political apathy to attend protests after school, carrying their books and wearing their uniforms. University students boycotted classes for weeks, spending days and nights on the streets in tents in defiance of their parents. [Source]

Below are tweets covering the clearing of the protest encampment, as of 11:15 pm PST, Wednesday:

'WE WILL BE BACK' helium balloons floating in the sky. What a beautiful moment #UmbrellaMovement #OccupyHK https://t.co/K1XPX3gVg1

Rows of police cars outside Jardine House. Stay safe everyone. This is just the beginning #UmbrellaMovement pic.twitter.com/FWSAGx3eS2

The first, most westerly, #OccupyHK barricade where police, media, bailiffs are gathered. pic.twitter.com/CnnH6vAFQI

Many are packing up in Admiralty. pic.twitter.com/kKb5H5hMsn

Again and again, all over the main #UmbrellaMovement camp which is now being cleared, protesters say they'll return: pic.twitter.com/ubFgjq7mFd

"you have 10 minutes to pack up and leave. We will reopen Harcourt Rd" pic.twitter.com/ZYSMJgPqJG

"You have 2 mins to clear your possessions, police will begin clearance." Noone moves #OccupyHongKong pic.twitter.com/HMBjnL5FRG

Slowly pushed back to entrance. Police being firm, but rushing people. #OccupyHK pic.twitter.com/OsOu0Ee3cY

Read more about the protest movement in Hong Kong, via CDT.