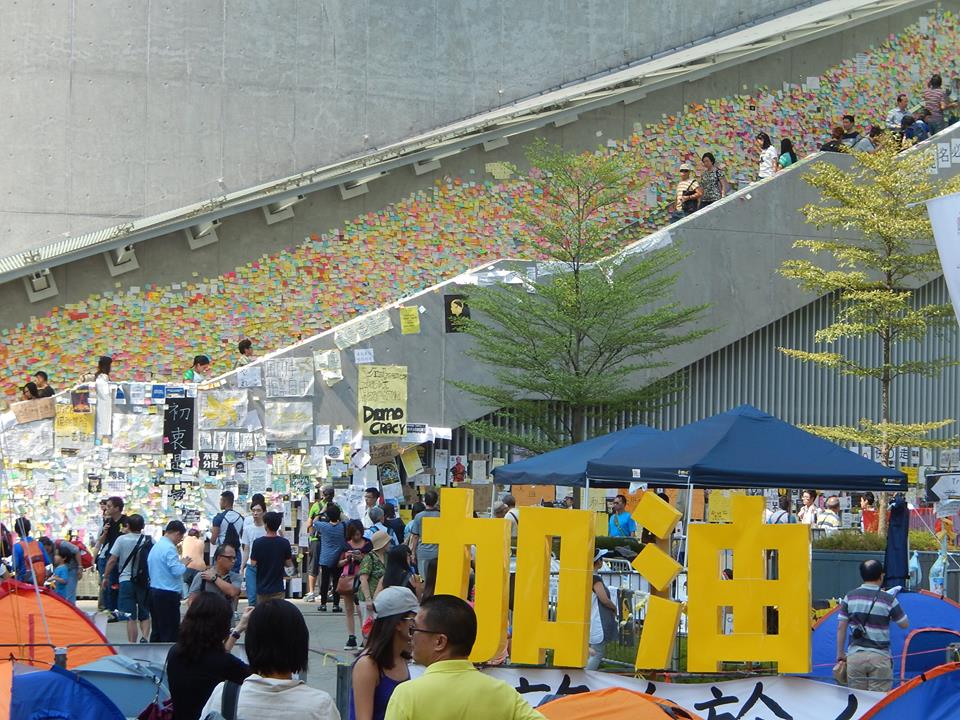 Following the clearance of part of the Hong Kong protest sites, and a subsequent attack on the legislative building by a small group of protesters, the ongoing civil disobedience movement in Hong Kong is at a crossroads. Last Thursday, tensions broke out between protesters and those who led the attack on the government buildings, Emily Tsang, Timmy Sung and Samuel Chan report for the South China Morning Post:

The drama began as dozens of protesters who answered an internet appeal to confront the leadership marched, some wearing masks, to the main stage of the Admiralty rally site at 8pm.

They carried placards reading “you do not represent us” and shouted at speakers on the stage.

“We have not been allowed to express our views freely on stage,” Samuel Chuang, one of the challengers, said. “If we say something the emcees do not like, they then add their comments later to ‘correct’ our speech.”

Protesters who had been camping at the site described the radicals as “troublemakers” and said they would film any who caused trouble so they could be held accountable later. [Source]

A split has also developed between Occupy Central leaders who plan to turn themselves in to police, and student protesters who prefer to stay on the streets and face arrest as police continue to carry out plans to clear protest sites. Jeffie Lam and Emily Tsang report for SCMP:

Under the tentative plan, the trio – Benny Tai Yiu-ting, the Reverend Chu Yiu-ming and Dr Chan Kin-man – and a small number of core supporters will turn themselves into police on December 5, while another group of the civil disobedience movement’s volunteers may follow suit after the pro-democracy sit-in ends.

“The two-stage plan aims at cooling down tensions on both sides,” said a source close to the camp. “While we want to tell society that we do not intend to destroy the rule of law, we hope occupiers can understand that we are not deserting them.”

They would continue to provide medical and legal assistance to protesters.

But Lester Shum, deputy secretary general of the Federation of Students, said: “We students think that it’s not the right moment to turn ourselves in yet as we are inclined to finish the final step of civil disobedience by being arrested.” [Source]

Meanwhile, public opinion is beginning to turn against the remaining protesters, a trend that accelerated after the attack on the legislature building. From Jennifer O’Mahony and Dennis Chong at AFP:

With little hope of fresh dialogue between protesters and government, the spectacle of a small faction smashing up a side entrance to Hong Kong’s legislature on Wednesday left a sour taste in a city where criminal damage is extremely rare.

And a thwarted attempt by student leaders to fly to Beijing and take their demands for free elections to China’s authorities did little to alter cooling public opinion.

“The majority are against it. What they are asking for is reasonable, but it’s causing a hindrance (to traffic),” said a 65-year-old gardener who gave his surname as Mo, waving a sprinkler as he tended to plants in public gardens around the main Admiralty protest site.

“There are many other ways to do it,” he said. “People have to make a living. I don’t know that much, but many people agree with me,” he added. [Source]

With this shift in attitude toward the protests, which have now endured for almost two months, Natasha Khan at Bloomberg interviews one student about her decision to join the protests and to skip school and defy her parents in order to stay on the streets:

Christy’s participation has been a constant source of tension with her mother. The two are close — going on joint holidays and shopping trips — yet have different values, Christy said.

After weeks of heated arguments and getting “the silent treatment” over sneaking off to the protests, Christy said she slept a few nights at the camp site while refusing to answer her mother’s calls.

Her mother became frantic, calling Christy’s friends in tears. Then she sent a Whatsapp message to Christy with a photo of her holding Christy as a baby.

“I felt so, so guilty at that point,” she said. “I called my mother and told her I was safe. That I knew what I was doing. That I wasn’t here for fun and I’m only here to fight for my future.” [Source]

Now that the protests are winding down, some who oppose the movement are blaming Hong Kong’s education system for failing to mold the students to be more acquiescent to government demands. Many of the protesters were born and raised in Hong Kong after the 1997 turnover to mainland China, yet increasingly people in Hong Kong identify themselves as “Hong Kongers” rather than “Chinese.” Simon Denyer at the Washington Post reports:

The problem, argue conservative voices such as the pro-Beijing Ta Kung Pao newspaper, lies in the schools. Teachers and university professors “lack a sense of nationhood, and have blindly inculcated the young with Western ideas like universal values and democracy,” the newspaper wrote in a recent editorial. “Textbooks have failed to shoulder the duty of propaganda.”

[…] In the establishment’s heavy-handed attempt to instill “Chinese values,” liberals hear disturbing echoes of the “thought reform” and patriotic re-education campaign that followed the 1989 Tiananmen Square protests, when dissent was crushed, students were sent to army boot camps and universities were brought to heel.

[…] Many students here see an economic system that is stacked against them and a government that fails to represent them. “The curriculum is not the root of the question. It’s the tycoons, the establishment guys and the vested interests,” said 18-year-old Max Lau, another of Scholarism’s young leaders. “We are merely the audience in this drama.” [Source]

As the protests have ebbed and flowed over the past two months, they have been targeted in the “largest cyberattack in history,” according to Parmy Olson at Forbes:

The distributed denial of service (DDoS) attacks have been carried out against independent news site Apple Daily and PopVote, which organised mock chief executive elections for Hong Kong. Now the content delivery network Cloudflare, which protects Apple Daily and PopVote, says the DDoS attacks have been unprecedented in scale, pounding the sites with junk traffic at a remarkable 500 gigabits per second.

It’s been “many times larger” than the Spamhaus cyber attacks last year that were credited with slowing down Internet speeds across the globe, and which saw 300 Gbps of attack traffic. The record since then had been a 400 Gbps DDoS attack in Europe, reported in February.

“[It’s] larger than any attack we’ve ever seen, and we’ve seen some of the biggest attacks the Internet has seen,” said Cloudflare CEO Matthew Prince in a telephone interview. Cloudflare provides DDoS protection service for Apple Daily and PopVote, the Hong Kong site which held an unofficial civil referendum on extending suffrage rights to Hong Kong. Representatives of PopVote could not be reached for comment. [Source]