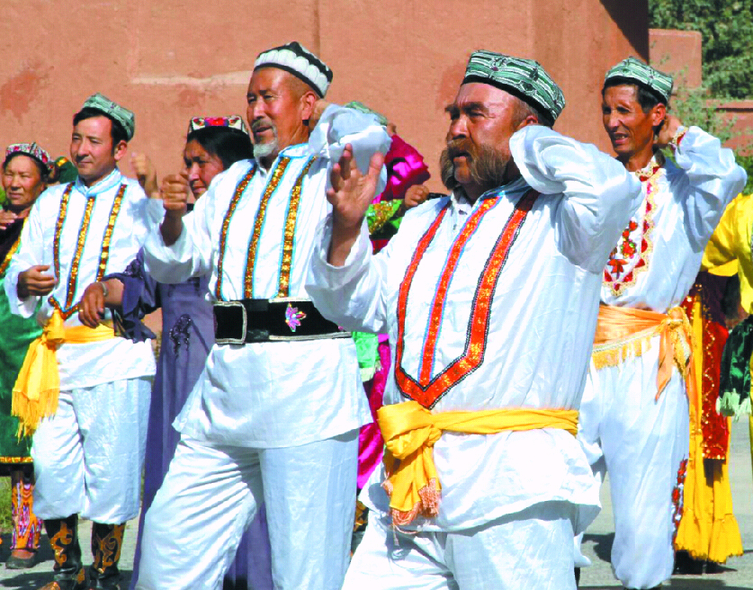 In a post for The China Story, the University of Sydney’s David Brophy describes state-sponsored mass “dance-ins” in Xinjiang, noting two layers of irony: one in officials’ choice to use patriotic renditions of Mandarin pop songs such as “Little Apple” (小苹果), “China’s answer to the Macarena,” as a soundtrack; the second in anxiety shared by Chinese authorities and Islamists over traditional Sufi sama dance. Chinese authorities are currently engaged in a controversial crackdown on terrorism in Xinjiang, amid which religious extremism is a primary target.

Good news stories from Xinjiang often involve dancing. It’s an article of faith for most Han Chinese that the Uyghurs, along with the other ethnic minorities of the People’s Republic, are particularly gifted when it comes to singing and dancing, and no tour of Xinjiang is complete without a night out at a dancing restaurant. China prides itself on its support for such things, citing its recent listing of the Uyghur meshrep on UNESCO’s list of the world Intangible Cultural Heritage, as evidence of its sound custodianship of Uyghur musical and dancing traditions.

[…T]here are particular reasons why the Chinese Communist Party might be interested in promoting public dancing in Xinjiang now. Beijing is nervous about what it considers signs of religious extremism among Uyghurs, and one of these telltale signs is a disinclination to dance. In speech at the National People’s Congress in March last year, a Xinjiang representative and deputy chairperson of the China Dancer’s Association Dilnar Abdulla gave a speech claiming that religious extremists in Xinjiang were ‘campaigning for the commoners not to sing and dance, even not permitting them to sing and dance at weddings.’

[…] Then, along comes the Little Apple, spreading inexorably from the interior like a meme. Whether or not the Kashgar mayor’s whim is entirely responsible for this, the turn to the Little Apple marks a sharp shift away from the idea that local cultural forms can be used as a bulwark against Islamic radicalism. If fads like the Little Apple continue to be spread with party-state approval, it will confirm Uyghur fears that the campaign against extremism and radicalisation is in reality a broad assault on Uyghur culture and religion.

Time will tell what will be the fate of the sama in Xinjiang. The irony is that if Chinese officials do end up displacing the sama with Chinese pop rituals like the Little Apple, they will be doing the Islamists’ work for them, and eradicating a Sufi practice that Islamic fundamentalists have long railed against. [Source]

Click through for Brophy’s full explanation of sama and how the religious elements of this tradition sparked concern in Xinjiang authorities. For more on Uyghurs and the situation in Xinjiang, see prior coverage via CDT.