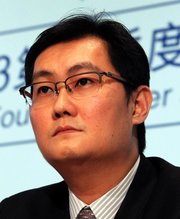 With the Two Sessions now underway in Beijing, The New York Times’ Michael Forsythe discusses the role of money in Chinese politics with a look at the unusually high concentration of wealth among delegates of the National People’s Congress and the Chinese People’s Political Consultative Conference.

Among the 1,271 richest Chinese people tracked by the Shanghai-based Hurun Report, a record 203, or more than one in seven, are delegates to the nation’s Parliament or its advisory body, which will convene for their yearly joint session this week in Beijing. According to figures released by the Hurun Report on Monday, the delegates’ combined net worth is $463.8 billion, more than the annual economic output of Austria.

[…] A seat on one of the two bodies is highly desirable, not because the positions are powerful, but because being a delegate provides access to the highest echelons of the party and the government. It is also a clear sign to potential business partners and rivals of political clout.

Membership in either body can also provide wealthy Chinese with protection from government actions that could hurt their businesses — something that wealthy Americans can achieve by hiring lobbyists, lawyers and public relations consultants — said Victor Shih, an associate professor at the University of California, San Diego, who studies the confluence of finance and politics in China. [Source]

Contrasting the Times’ focus of the accumulated wealth of delegates and lawmakers, Xinhua praises recent progress towards more balanced representation at the annual meetings:

If, as the New York Times lamented in a recent report, billionaires like [Tencent CEO Pony] Ma “ensure the rich are represented in China’s legislature”, deputies like Xue [Haiying, a Tianjin sanitation worker and CPPCC delegate], who earns around 200 US dollars a month cleaning the streets, ensure laborers “access to the highest echelons of the party and the government”.

China’s legislature is not without room to improve its composition, but it has been making big strides in recent years. Farmers and factory workers made up 13.42 percent of deputies to the 12th NPC, a 5.18-percent rise from the 11th NPC.

In 2010, China amended its Electoral Law to ensure both rural and urban areas adopt the same ratio of deputies, ending a practice where each rural deputy represented a population four times that of an urban deputy.

[…] Just as every other challenge posed to China in its path forward requires a difficult balance, the same can be said about balancing representation at the National People’s Congress. [Source]