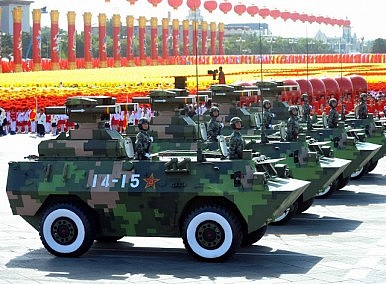 To mark the upcoming 70th anniversary of Japan’s defeat at the end of World War Two, China will be conducting an elaborate military parade this fall to which foreign military representatives and world leaders, including Japan’s prime minister, are invited to attend. The Associated Press reports:

A defence ministry spokesman, Geng Yansheng, said foreign government and military leaders would be invited as observers and members of their armed forces would be welcome to march in the parade.

The Japanese prime minister, Shinzo Abe, had been invited, the South China Morning Post reported. However, he was reluctant to accept, according to government sources in Tokyo, as it would signal Japan’s submission to its former enemy.

[…] “Through the military parade, China hopes to demonstrate our firm stance, join hands with the rest of the world, safeguard the victorious outcome of the second world war, maintain world peace and stability, and create a better future for mankind,” Geng said at a monthly news conference.

He said the parade would take place on or around the 2 September anniversary of Japan’s formal surrender. Invitations would go out to countries that fought in the conflict as well as to some with no direct connection, Geng said, without mentioning individual nations by name. [Source]

AFP reports that the invitation extended to Japan came with renewed calls for the Japanese government to own up to its wartime aggression. From South China Morning Post:

The foreign minister said on Sunday that Japan’s political leaders needed to be more sincere in dealing with historical issues – and suggested that if they were then China would be open to inviting Japanese Prime Minister Shinzo Abe to a military parade and other events marking the 70th anniversary of the end of the second world war.

“Will it continue to carry the baggage of history or will it make a clean break with past aggression? Ultimately, the choice is Japan’s.”

[…] A major focus is on whether Abe will uphold Japan’s past apologies, such as those expressed in statements on the 50th and 60th anniversaries of the war’s end, which used the terms “colonial rule” and “aggression”. [Source]

FT reports that the invitations present a problematic diplomatic dilemma for many world leaders, who are reluctant to accept the invitation for fear of being seen as siding with China over Japan.

Despite interpretations that the parade is meant for the sole purpose of displaying China’s military strength and asserting the country’s growing regional and international importance, the unusual international scope of the parade suggests that the upcoming event is focused instead on showcasing China’s peaceful intentions. The Diplomat’s Shannon Tiezzi reports:

[…] “This year’s military parade is special in the sense that it is not only China that will take part in the parade, and it is actually an international event,” Geng told reporters. “[W]e are inviting the leaders of other countries to observe the military parade and we are also inviting the militaries of other countries to send their own contingents or teams to take part in and observe the military parade.” Geng added that “the purpose [of the parade] is to refresh people’s memories of the past and love for peace, pay tribute to the national martyrs, and create a better future.”

[…] A more detailed article published in Xinhua sheds more light on this year’s parade. Rather than displaying China’s latest military technologies, as the National Day parades do, this parade will have a different focus: promoting an image of China’s military forces as peacekeepers. “The world will see the PLA as important force of promoting peace,” a researcher at the PLA Academy of Military Science told Xinhua. A top PLA Navy advisor agreed, telling Xinhua that “the parade will convey to the world that China is devoted to safeguarding international order after WWII, rather challenging it.” [Source]