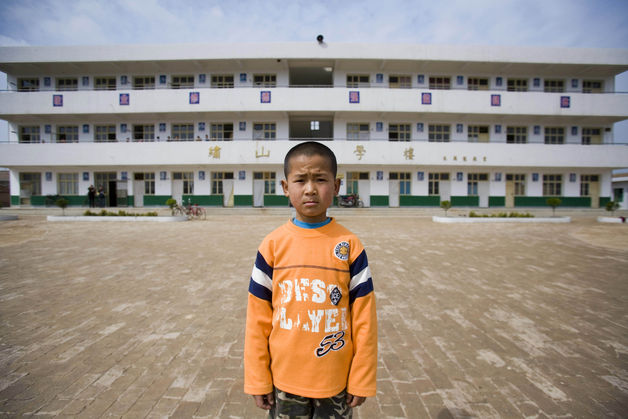 At Bloomberg News, Dexter Roberts reports on the poor conditions and low quality of education at one of China’s 100,000 boarding schools catering to “left-behind children” in the countryside, and how this environment negatively impacting students psychologically, academically, and physically:

Hunger and loneliness are commonplace, according to students, who spend more than 10 months a year at the school. A 13-year-old girl bundled up in a pink parka to keep warm against the early March chill says she gets to see her parents, who work in the provincial capital of Xi’an, only two or three times a year. “The most difficult part of being here: I miss my mother and father,” she says, breaking into tears. The girl, other students, teachers, and administrators interviewed for this story asked that neither they nor the school be identified, as they were not authorized to speak to foreign media.

Data gathered by independent researchers show that Chinese boarders lag emotionally and academically. “The boarding kids are the ones who cause the most trouble,” says the principal of a junior high school in Shaanxi that has a mix of boarding and day students. “Their emotional development isn’t very good because they haven’t grown up with their parents,” he says. “They don’t study or do their homework, and when they come to class they just play with their mobile phones.” He adds that a request for permission to hire more “life teachers,” to help boarders with psychological issues, was rejected by the township education bureau.

[…] Boarding students trail their peers in other ways. The average boarder is 3 centimeters shorter than a nonboarder, according to another joint study by Stanford, the Chinese Academy of Sciences, and Northwest University in Xi’an. “The students who go home for the weekend are OK. I worry most about those who live here all the time,” says the principal of the Shaanxi elementary school. “They have enough to eat but not necessarily always the right nutritious things.”

Years of living in dirty, crowded dormitories with little supervision—one dorm monitor is often in charge of more than 100 students—exact a psychological toll. […] [Source]

At the BBC, Celia Hatton reports on Li Jian, a teacher at a rural boarding school in Hebei Province, who was last year found guilty of torturing and raping several students:

Li Jian, the teacher, was in charge of discipline at the school. In court, the boys testified that Li would pick on the students who made mistakes during the school’s morning exercise drills. Those are the ones he would bring back to his home for “extra instruction”.

Li received a prison sentence of two years and 10 months. China has no laws banning male rape over the age of 14. The victims could not prove the sexual abuse started before they were 14, so the court only found Li Jian guilty of detaining his students.

[…] It seems that no-one really knows what takes place behind closed doors in China’s boarding schools. Thirty million children across mainland China attend schools far away from home, according to Ministry of Education statistics from last year.

Advocates from Save the Children warn there’s a “high risk” of abuse at Chinese boarding schools without proper safeguards in place. Children as young as five live far away from their parents, at schools with no teacher background checks and no means to report sexual or physical violence. [Source]