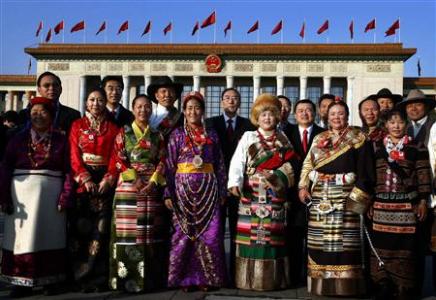 At Foreign Affairs, Tibetan Studies professor Gray Tuttle analyzes ethnic prejudice and racism in Chinese society, and how this manifests as political, economic, and social discrimination:

[…A]nalyses of China’s troubles in Tibet and other areas that are home to large numbers of ethnic minorities often miss a crucial factor. Many observers, especially those outside China, see Beijing’s repressive policies toward such places primarily as an example of the central government’s authoritarian response to dissent. Framing the situation that way, however, misses the fact that Beijing’s hard-line policies are not merely a reflection of the central state’s desire to cement its authority over distant territories but also an expression of deep-seated ethnic prejudices and racism at the core of contemporary Chinese society. In that sense, China’s difficulties in Tibet and other regions are symptoms of a deeper disease, a social pathology that is hardly ever discussed in China and rarely mentioned even in the West.

When placed next to the challenge of maintaining strong economic growth, fighting endemic corruption, and managing tensions in the South China Sea, China’s struggle with the legacy and present-day reality of ethnic and racial prejudice might seem unimportant, a minor concern in the context of the country’s rise. In fact, Beijing’s inability (or unwillingness) to confront this problem poses a long-term threat to the central state. The existence of deep and broad hostility and discrimination toward Tibetans and other non-Han Chinese citizens will prevent China from easing the intense unrest that roils many areas of the country. And as China grows more prosperous and powerful, the enforced exclusion of the country’s ethnic minorities will undermine Beijing’s efforts to foster a “harmonious society” and present China as a model to the rest of the world.

Estimates vary, but close to 120 million Chinese citizens do not belong to the majority Han ethnic group. Ethnic minorities such as Kazakhs, Koreans, Mongols, Tibetans, Uighurs, and other groups represent only eight percent of China’s population. But their existence belies a commonplace notion of China as a homogeneous society. It’s also worth noting that, taken together, the regions of China that are dominated by non-Han people constitute roughly half of China’s territory and that if non-Han Chinese citizens formed their own country, it would be the 11th largest in the world, just behind Mexico and just ahead of the Philippines.   […] [Source]

While Professor Tuttle’s analysis focuses on Tibetans, he points out that they “represent only about five percent of China’s non-Han citizens, [… and that they are] in many ways an effective stand-in for the experience of the other minority groups.” Click through for Tuttle’s full essay.

Last week at TIME, Emily Rauhala reported on the rebuilding of quake-devastated Jyekundo (Yushu in Chinese), where relief and rebuilding has come with significant numbers of Han authorities and at cultural cost to local Tibetans:

There are also, at every turn, reminders of this. There are signs thanking the People’s Liberation Army, state-owned enterprises, and Communist Party officials. “Gratitude. Self-strengthening. Innovation. Harmony,” reads one banner. “Develop activities to promote national unity,” reads another. On the road into town, Xi Jinping, Chairman of the Communist Party and President of the People’s Republic, waves at motorists from a massive red billboard: “Unite all Chinese. Realize the China Dream.”

The ruling party’s dream for this region is, and has always been, at odds with what many ethnic Tibetans want. This is the edge of Chinese empire, a contested space where everything has two names and two histories. What Tibetans call colonization, the ruling CCP calls “serf liberation.” Even as monks burn themselves alive to protest Chinese rule, state media trumpet campaigns to improve Tibetan livelihoods through road building and water treatment.

In this sense, the story of Yushu/Jyekundo feels like the story of contemporary Tibet told in fast-forward. The earthquake’s destruction sped the influx of non-Tibetans to the once isolated town. These CCP-backed soldiers, officials and fortune seekers brought money and resources — first shovels and water, and then scaffolding and cranes. But the help was not offered without condition and has resulted in heightened state control. […] [Source]

Aside from the Tibetans, the only other Chinese ethnic minority commanding substantial international media attention is the Uyghurs, another group among which some hold a desire for independence. The Uyghur’s native Xinjiang has in recent years seen an upswing in violence, which authorities have answered with a heavy-handed crackdown on terrorism. While open discussion of an independent Uyghurstan or East Turkestan is forbidden in Xinjiang, a recent report from Rustam Qobil at BBC explains how this is increasingly the case for members of the Uyghur community in neighboring Kazakhstan as Chinese influence grows:

Now about 350,000 live in the region, mostly in Kazakhstan, and until recently they were free to voice support for Uighur self-rule in Xinjiang.

But things have been changing, as China has poured investment into Central Asia, building oil and gas pipelines, railways, roads and cross-border trading zones.

“The Chinese influence in Central Asia is growing,” says Kakharman Khozhamberdi, the Central Asian representative of the World Uighur Congress.

“Now talking of the Uighurs’ problems in Xinjiang has become impossible. Whoever talks of them will be punished.” […] [Source]

In a recent review of “Wild Pigeon,” a collection of photographer Carolyn Drake’s work in Xinjiang, the New York Review of Books’ Ian Johnson points out that there is more nuance to Xinjiang—and to the character of local resistance against Beijing’s policies there—than international headlines tend to focus on:

Xinjiang is one of those remote places whose frequent mention in the international press stymies true understanding. Home to China’s Uighur minority, this vast region of western China is mostly known for being in a state of permanent low-grade conflict, with terrorist attacks and a ferocious government crackdown, even against moderate Uighur academics. To the outside world, Xinjiang conjures up a series of stock adjectives or phrases: “restive,” “Muslim,” “oppressed,” and—as the misleading titles of more than one recent book have it—China’s “Wild West.”

And yet few outsiders spend much time there. Foreign academics have largely been barred from research, with several prominent scholars of Xinjiang banned from entering China. Foreign journalists tend to fly in and out for a dateline and an interview. The American photographer Carolyn Drake is an exception. […] [Source]

For more on Tibet and the Tibetans, Xinjiang and the Uyghurs, racism, ethnic discrimination, or Chinese influence in Central Asia, see prior coverage via CDT.