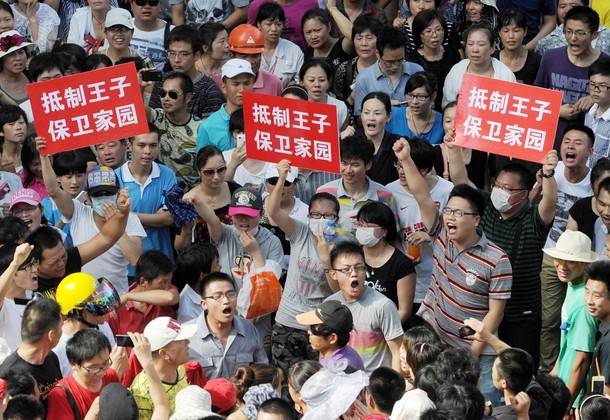 Last September, after the National People’s Congress outlined proposed reforms for the election of the Hong Kong Chief Executive, pro-democracy groups stepped up protests calling for full universal suffrage. After seven weeks of street demonstrations, the protesters were unable to extract concrete concessions from Hong Kong or Beijing leaders. Last week, the Hong Kong government released the details of the electoral reform plan, which differs only minimally from the original outline. Emma Graham-Harrison at the Guardian reports:

The draft election law, as expected, follows closely an outline drawn up in Beijing last summer by China’s parliament.

It allows over 5 million eligible voters to cast a ballot for their leader in a 2017 election, a measure Hong Kong’s pro-Beijing government argues offers the universal suffrage promised by the city’s mini-constitution.

However, all would-be contenders must be vetted by a 1,200-member panel widely viewed as sympathetic to Beijing, and only two or three will be allowed to contest the election, prompting opposition politicians and activists to denounce the system as “fake democracy”.

[…] Opposition democrats have already vowed to veto the plan when it is put to a vote this summer, and hold a one-third bloc of seats that would allow them to keep it from becoming law.
[Source]

In “A Guide to the Proposed Changes to Hong Kong’s Election Rules” in the New York Times, Patrick Boehler and Alan Wong describe the draft law in more detail:

Under the current voting method using the Election Committee, hopefuls need the recommendation of at least 150 members to be candidates for the final vote by the committee. Under the new proposal, prospective candidates could be recommended by 120 members of the nominating committee. On Wednesday, Chief Secretary Carrie Lam said that she expected five to 10 contenders to emerge in this process.

The committee would then vote in a secret ballot on that pool of nominees to choose the two or three candidates who would face voters in an election. To run in the general election, each candidate would have to receive the endorsement of at least half of the committee’s 1,200 members. Democratic politicians strongly object to that 50 percent threshold, arguing that the nomination committee would not chosen by a popular vote and would be skewed toward politicians and businesspeople who heed the Chinese government’s preferences. [Source]

In an analysis of the draft law, Richard C. Bush III of the Brookings Institute explains:

The most prominent element of the Hong Kong government’s proposal yesterday is a recommendation on the procedural mechanism by which the Nominating Committee (NC) would review candidates. This was important for two reasons. One, under the plan the NC will have the authority to pick two or three final candidates to actually run in the election. Two, Mrs. Lam made clear that that the NC’s membership would be similar to the 1,200-person election committee that has picked the CE up until now and is weighted in favor of people who are biased toward Beijing.

Thus, who the NC considers before making its final nominations becomes critical. That will determine whether the election will provide a choice between the majority who have long favored a quick transition to democracy, and those who have preferred to move slower; and also between those who believe that the current economic system benefits only the rich and should be reformed, and those who are happy with current policies. [Source]

But in a statement, Human Rights Watch called the proposal a “farce,” and “a rejection of international law and of the promise of democracy for the citizens there who have fought for it for so long”:

Although the proposal will finally allow all eligible voters in Hong Kong to cast ballots for the territory’s chief executive, it will imposes a stringent screening mechanism that effectively bars candidates the central government in Beijing dislikes from nomination for chief executive. The proposal establishes a “Nomination Committee,” which consists of 1,200 members drawn from four categories of professions. Individuals who wish to become the chief executive must first be recommended by between 120 and 240 of the committee members before they can become initial candidates. Only those initial candidates endorsed by more than half of the committee can become formal candidates, and the proposal stipulates that the Nomination Committee will only endorse two or three candidates. The public will then only be able to cast a ballot on those two or three candidates. The Nomination Committee is identical in structure to the Election Committee that currently selects the chief executive, which is arranged in ways that ensure Beijing supporters always greatly outnumber others, and thus guarantees the central government’s control of the outcome. [Source]

Last weekend, after the proposal was announced, protesters gathered in Mong Kok, the scene of street protests last fall. Eleven people were arrested, according to AFP:

The government’s contentious leadership election roadmap, which was released on Wednesday, has prompted several protests.

[…] Police said that the most recent scuffles broke out late on Sunday at around midnight, and confirmed pepper spray was used.

“One tried to snatch away an officer’s baton, and used his leg to attack the officer,” the spokesman said. [Source]

Despite this protest, the movement that generated the protests of the fall has failed to garner enough momentum to get large numbers of Hong Kong residents to speak out against the reforms. According to a public opinion poll, almost half of Hong Kong residents support the new plan, Natasha Khan and David Tweed report for Bloomberg:

In a survey of 1,167 people commissioned by Now TV, 47 percent supported the proposal while 38 percent opposed it, the broadcaster said. The rest were undecided in the first poll conducted by three local universities since the bill was unveiled.

Lawmakers in Hong Kong are set to vote on a plan before the end of July, which will see citizens elect a chief executive from candidates screened by a China-backed committee. Pro-democracy lawmakers have pledged to veto the plan after tens of thousands of protesters clashed with the police last October to demand wider election rights.

“Public opinion remains deeply divided, roughly along 50/50 lines,” said Sebastian Veg, director of the French Centre for Research on Contemporary China in Hong Kong. “If there is no consensus in society, pushing through reform by force can be very counterproductive.”

[…] The government and pro-democracy lawmakers have started campaigns to win public support for their stance. An open-bus tour on April 25 by Hong Kong’s No. 2 official Carrie Lam was disrupted by protesters. [Source]

But months after protests blocked several of Hong Kong’s major thoroughfares for weeks at a time, some participants are blaming the Hong Kong Federation of Students—one of the primary groups behind the protests—for being too passive in their demands. Suzanne Sataline reports for Foreign Policy:

Today, many participants from last year’s occupation consider the movement a failure. After all, the strike did not achieve its stated goals of toppling the chief executive, C.Y. Leung, or jettisoning the election system in which 1,600 business and trade groups chose him. In fact, the campaign won no material concessions. The federation had kicked off the protest with a week-long class boycott, and has become an easy target for those disappointed. “Students felt betrayed by the federation,” said Leonard Sheung-fung Tang, a political science student leading the campaign to end federation ties at City University. The federation has lost the trust of students, and if it urged people to stand up to the police again, Tang said, most students wouldn’t listen.

Throughout the protest, student federation leaders preached non-violence even as they faced withering criticism for that tactic – especially online and on social media — as a more radical faction grew in prominence, if not number. Months after police cleared the democracy encampments, several veterans of the occupation urged people to join rallies to protect Hong Kong against a mainland incursion. Hundreds of angry people verbally attacked mainland visitors and confronted police.

As animosity toward mainlanders grows in Hong Kong, some students are trying to clearly demarcate their interests and demands from those across the border. Alan Wong at the New York Times reports that some student groups won’t participate in the rally to commemorate the June 4 military crackdown in Beijing. The annual candlelight vigil last year drew more people than any year since 1989:

Albert Ho, chairman of the Hong Kong Alliance, said the decision would not hurt the vigil. “It’s a shame that the student federation won’t stand alongside us on the stage this year,” he said, “but it’s not hard to find other young people.”

He said of student dissenters: “Some of them are facing an identity crisis. They are questioning whether they are Chinese. Some even think Hong Kong’s fight for democracy should be separate from that of the mainland.” [Source]

Read more about the Hong Kong protests of 2014, via CDT.