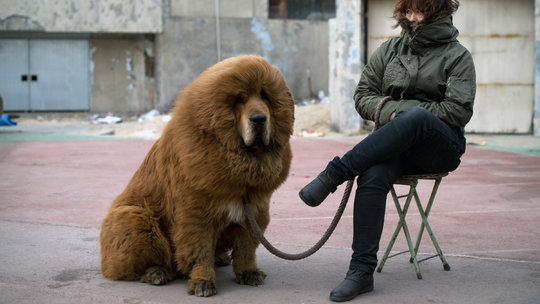 At the New York Times, Andrew Jacobs reports on the bursting of a bubble in demand for Tibetan mastiffs, once must have status symbols demanding hundreds of thousands of dollars per dog. Jacobs’ looks at how a slumped economy, crackdown on ostentatious behavior amid Xi Jinping’s ongoing corruption purge, speculative breeding, and the general fickleness of China’s luxury market have contributed to the burst, and at how animal rights activists are working to save these once precious animals from slaughter:

There once was a time, during the frenzied heights of China’s Tibetan mastiff craze, when a droopy-eyed slobbering giant like Nibble might have fetched $200,000 and ended up roaming the landscaped grounds of some coal tycoon’s suburban villa.

Instead, earlier this year Nibble and 20 more unlucky mastiffs found themselves stuffed into metal chicken crates and packed onto a truck with 150 other dogs. If not for a band of Beijing animal rights activists who literally threw themselves in front of the truck, Nibble and the rest would have ended up at a slaughterhouse in northeast China where, at roughly $5 a head, they would have been rendered into hot pot ingredients, imitation leather and the lining for winter gloves.

[…T]he Tibetan mastiff [is] a lumbering shepherding dog native to the Himalayan highlands that was once the must-have accouterment for status-conscious Chinese. Four years ago, a reddish-brown purebred named Big Splash sold for $1.6 million, according to news reports, though cynics said the price was probably exaggerated for marketing purposes. No reasonable buyer, self-anointed experts said at the time, would pay more than $250,000 for a premium specimen. […] [Source]